Since ancient times, humans have sought to conquer pain using a variety of treatments ranging from the sublime to the bizarre. Although the Greeks and Romans first advanced a theory of sensation—the idea that the brain and nervous system have a role in producing the perception of pain—it was not until the Middle Ages and well into the Renaissance that evidence began to accumulate in support of these theories.

The nineteenth century saw the development of morphine, codeine, and heroin—potent pain medications derived from opium. In the early 1800s morphine was marketed as a pain medication as well as treatment for opium and alcohol addiction. Soon thereafter, cocaine was successfully isolated from coca leaves by a German chemist. 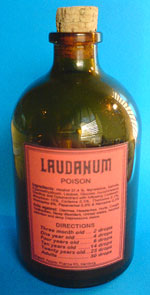 Left: Bayer Heroin bottle, originally containing 5 grams of Heroin substance. Right: A 100-ml bottle of laudanum. Note the dosages on the label for infants, children, and adults. Source for both images: Wikimedia Commons.

Until the late 1800s laudanum, a popular tincture containing opium and alcohol and other ingredients such as honey, saffron, or cinnamon, was widely used—and completely legal. It was commonly used for pain, menstrual cramps, sleep aid, and a wide variety of other ailments both in children and adults.

At the turn of the nineteenth century, “pure” aspirin was isolated from salicylate-rich plants. This discovery represented a major breakthrough in the history of pain medications. To this day aspirin is the most commonly used pain reliever worldwide.