5. The Physiology of Pain

A section of a lumbar vertebra showing the sensory nerves (in yellow, with bulge) entering the dorsal part of the spinal cord. Illustration provided by 3DScience.com. Used by permission.

Pain occurs when sensory nerve endings called nociceptors (also referred to as pain receptors) come into contact with a painful or noxious stimulus. The resulting painful impulse travels from the sensory nerve ending, enters the dorsal spinal cord, and travels to diverse parts the brain via nerve tracts in the spinal cord and brainstem. The brain processes the pain sensation and quickly makes a motor response in an attempt to cease the action causing the pain.

There are two major classes of nerve fibers associated with the transmission of pain: 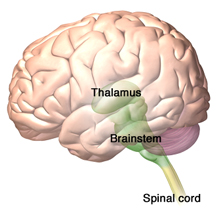 One of the most important central pain pathways is the spinothalamic tract, which originates in the spinal cord and extends to the thalamus. This spinal tract transmits sensory information related to pain, temperature, and crude touch. Another prominent pathway is the spinoreticular tract, which is involved in nociceptive processing. The spinoreticular tract is similar to the spinothalamic tract in that it is excited by similar sensory fibers. Rather than ascending to the thalamus however, spinoreticular neurons terminate within the brainstem reticular formation.

Sensitization is a neurophysiologic response in which the pain pathways become more sensitive. This can include a drop in the threshold for activating nociceptors and an increase in the frequency of firing for all stimuli (IASP, 2012). Hyperalgesia (exaggerated responses to stimuli) and allodynia (in which a stimulus not normally painful is perceived as painful) are clinical markers used to detect the presence of sensitization (Zouikr et al., 2016). There are two types of sensitization: peripheral and central.

Peripheral sensitization occurs in response to the release of inflammatory molecules such as histamine, prostaglandins, and pro-inflammatory cytokines. These substances sensitize nociceptors by creating an “inflammatory soup” that enhances pain sensitivity by reducing the threshold of nociceptor activation (Zouikr et al., 2016). Under normal circumstances, peripheral hypersensitivity returns to normal when inflammation subsides or the source of the injury is removed (Kyranou & Puntillo, 2012).

In central sensitization, nociceptive-specific neurons progressively increase their response to repeated non-painful stimuli, develop spontaneous activity, and increase the area of the body that is involved with the pain. The hyperalgesia of central sensitization usually develops as part of ongoing pathology, such as damage to peripheral or central nerve fibers, cancer, or rheumatoid arthritis, and is considered maladaptive (Kyranou & Puntillo, 2012).

The development of computed tomography (CT) and magnetic resonance imaging (MRI) has allowed researchers to look into the living brain and gain some understanding of the parts of the brain affected by pain. The subsequent development of positron emission tomography (PET) has allowed researchers, for the first time, to investigate neuronal activity throughout the entire brain (Casey, 2015).

Imaging techniques are helping us understand that pain is more complex than previously thought and involves diverse regions of the brain (ie, the amygdala, insula, and the anterior cingulate cortex). We are also learning that pain involves complex interactions between the immune, nervous, and endocrine systems (Zouikr et al., 2016).

In a study of patients with chronic low back pain, neuroimaging showed differences in brain function when compared to healthy controls. Chronic low back pain patients showed activation in pain-related brain regions during administration of experimental pain, differences in activation during emotional decision-making tasks, and changes in specific brain regions during a simple visual attention task (Kong et al., 2013).

In patients with chronic pain, a number of research groups have reported significant changes in pain processing including alterations in basic processes in the brain and brainstem, changes in functional plasticity, and the development of allodynia* in which a stimulus not normally painful is perceived as painful. Imaging techniques using magnetic resonance spectroscopy have shown alterations in neurotransmitters in chronic pain patients. Such approaches have been applied to migraine, back pain, and spinal cord injury (Borsook et al., 2007).

A number of studies have shown changes in volume in brain regions in patients with chronic neuropathic pain, complex regional pain syndrome, and fibromyalgia. This insight has begun to transform our thinking on chronic pain, since these changes indicate the potential that chronic pain is a neurodegenerative disease (Borsook et al., 2007).

The cardiovascular system responds to the stress of unrelieved pain by activating the sympathetic nervous system. Following a surgical procedure, this can include hypercoagulation and increased heart rate, blood pressure, cardiac workload, and oxygen demand. Since the stress response causes an increase in sympathetic nervous system activity, intestinal secretions and smooth muscle sphincter tone increase, and gastric emptying and intestinal motility decrease. This response can cause temporary impairment of gastrointestinal function and increase the risk of ileus (intestinal obstruction). Aggressive pain control may be needed to reduce these effects and prevent thromboembolic complications.

Unrelieved pain may be especially harmful for patients with metastatic cancers. Stress and pain can suppress immune function, including the natural killer cells that play a role in preventing tumor growth and controlling metastasis.