Diabetes Type 2: Nothing Sweet About ItPage 4 of 16

2. The Scope of Diabetes

Unfortunately, diabetes has become a common disease in the United States and worldwide. About 9% of Americans have DM, and 90% to 95% of them have type 2 diabetes (ADA, 2015). Americans living in poverty are more likely to have diabetes than middle-class and affluent Americans. Diabetes has also been correlated with obesity, creating a new term among healthcare professionals called “diabesity.” Alarmingly the trend is increasing each decade in our country, with a higher incidence of both diabetes and obesity that is projected to worsen. With current trends of obesity and metabolic syndrome, by the year 2030, 1 in every 3 people will develop diabetes mellitus (Wild et al., 2004). 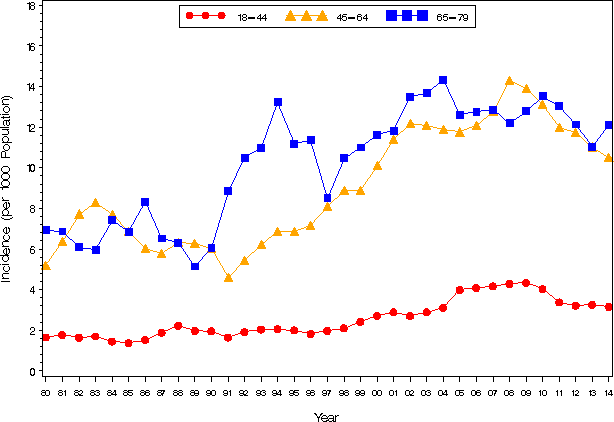 As shown in the above graph, from 1980 through 2014 the percentage of the civilian, non-institutionalized population with diagnosed diabetes mellitus increased by:

In general, the percentage of people with diagnosed diabetes has increased among all age groups. In 2014 the percentage of diagnosed diabetes among people aged 65 to 74 (20.7%) was more than 11 times that of people younger than age 45 (1.8%). It has been said 80% of people older than age 75 will eventually develop DM due to pancreatic fatigue and the prevalence of obesity. The number of Americans with diagnosed diabetes has more than tripled from 5.5 million in 1980 to 22 million (CDC, 2014). Looked at pragmatically, that becomes job security for you as a healthcare professional!

Prevalence of Diabetes by Year 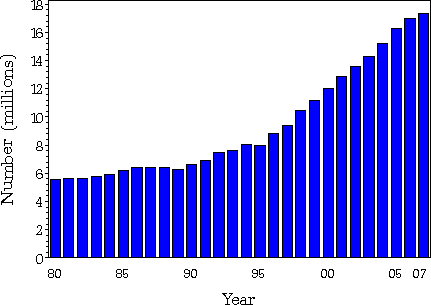 Diabetes is increasing dramatically throughout the world. As countries become industrialized, with less manual labor, their populations become more sedentary and people eat a higher calorie Western diet, which fosters the development of type 2 diabetes. More than 3% of the world’s population has been diagnosed with diabetes, with the highest concentrations in developed countries.

Prevalence of T2DM Across the World 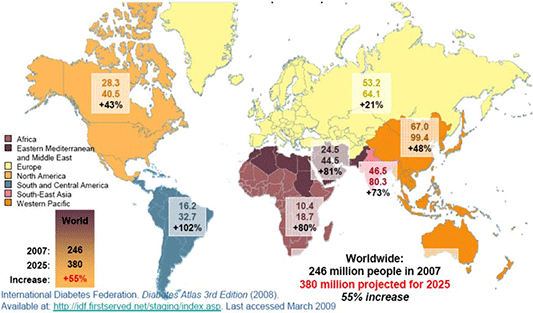 Due to the burden of rising numbers of people with DM, more attention has been directed at preventing the disease. In efforts to screen for diabetes, millions more individuals are being identified as having prediabetes, which presents as higher-than-normal blood sugar levels—but not quite high enough to diagnose as diabetes mellitus. A normal fasting blood sugar is 60 to 100 mg/dL. Diabetes is diagnosed by a fasting blood sugar >125 mg/dL. Prediabetes, or impaired fasting glucose, is diagnosed by a fasting blood glucose >100 mg/dL and <126 mg/dL. The prevalence rose dramatically from 27% in 2000 to 34% by 2010 (Abraham & Fox, 2013). It is estimated that 19% of Americans currently have prediabetes, which is 86 million Americans age 20 and older, and up from 79 million in 2010 (ADA, 2014).

Picture yourself in a room of 100 people: 19 people will have prediabetes, 8 of them will have type 2 diabetes, 1 will have type 1 diabetes and another 34 will have metabolic syndrome, which is another risk factor that will be discussed later in this course (Aguilar et al., 2015).

The Cost of Diabetes

Generally when we speak of the cost of anything, we are referring to economic cost. The costs of diabetes, however, are not only financial but also in terms of morbidity and mortality.

Diabetes mellitus is an expensive disease. The total estimated cost of diabetes mellitus in the United States in 2012 was $245 billion. Direct medical costs were $176 billion, which includes doctor visits, surgeries, hospitalizations, prescription medications to treat complications, inpatient nursing stays, and medical supplies. An additional $69 billion is estimated for loss in productivity, sick days, early retirement due to illness, and other factors (ADA, 2012).

The majority (62%) of the costs are paid by government insurance programs such as Medicare, Medicaid, and the military, which means taxpayers are paying the bill. Those without insurance have 55% more emergency department (ED) visits, increasing the overall cost of problems that may have been preventable with adequate medical care and health coaching. The trend is moving toward increased economic costs; the medical expenses in 2012 were 41% higher than 2007, which was $174 billion. The human cost, however is even more. Loss of enjoyable quality of life and relationships may be the more tragic costs.

Diabetes is listed as a contributor to 10% of American deaths. This makes diabetes the seventh leading cause of death listed on U.S. death certificates. Although cardiovascular disease is listed as the number one cause of death, people with diabetes mellitus are at 4 to 6 times greater risk for cardiovascular disease, still placing diabetes as a top cause of premature death. Overall, the risk for death among people with diabetes is twice that of people of similar age without diabetes (NIDDK, 2008). Adults with diabetes have a 59% higher risk for death than nondiabetics.

A person with diabetes is more likely to be hospitalized than is a person without diabetes. The hospital stay is likely to be longer due to complications (Moghissi et al., 2009). Diabetes hospitalizations are largely due to the other major health problems caused or worsened by diabetes (NIDDK, 2008). Chronic hyperglycemia is the primary metabolic problem of T2DM. Persistent excess glucose in the blood damages tissues throughout the body. People with long-standing type 2 diabetes can have cardiovascular damage, kidney destruction, retinal damage, peripheral nerve damage, foot problems, poor wound healing, and an increased risk of developing Alzheimer’s disease. These problems generally begin years before diabetes is even diagnosed.

What percentage of Americans have diabetes mellitus?

What can you do to make an impact on the high statistics of diabetes?