Diabetes Type 2: Nothing Sweet About ItPage 5 of 16

The classification of diabetes mellitus includes Type 1, Type 2, and gestational diabetes, plus a catchall known simply as “other.”

Diabetes is defined by the American Diabetes Association as “a group of disorders characterized by hyperglycemia resulting from defects in insulin secretion, insulin action, or both. The chronic hyperglycemia of diabetes is associated with long-term damage, dysfunction, and failure of different organs, especially the eyes, kidneys, nerves, heart, and blood vessels” (ADA, 2015).

Diabetes is a disorder that causes chronically high concentrations of sugar (blood glucose) in the bloodstream. This chronic hyperglycemia gradually produces tissue damage, especially to eyes, kidneys, nerves, heart, and both large (macro) and small (micro) blood vessels. To simplify the definition for patients, you could say that in diabetes the body doesn’t use food effectively. Although the hallmark symptom of diabetes is hyperglycemia, as noted above there are four different classes or types of diabetes based on the different pathologies involved.

Several patients may present with similar symptoms but be diagnosed with different types of diabetes mellitus. See if you can determine what type of diabetes each patient has.

A 15 year-old Caucasian girl presents with polyuria, polydipsia, and fatigue for 2 months.

Each one of these patients presents with very similar symptoms and all result in a diagnosis of DM, yet each has a different pathology and can be diagnosed with a different type of diabetes.

Patient 1 has type 1 diabetes mellitus, and labs would probably reveal the patient has insulinopenia, or absence of endogenous insulin, generally due to an autoimmune response that resulted in destruction of insulin-producing beta cells. This patient would require insulin injections for the rest of her life.

Patient 2 has developed type 2 diabetes with risk factors of age, ethnicity, and obesity. This patient will need strategies for weight loss, meal planning, and probable combinations of antihyperglycemic medications for the rest of his life if lifestyle behavior change is not enough to control hyperglycemia.

Patient 3 has gestational diabetes, possibly with risk factors of ethnicity and overweight. This patient will probably require insulin injections for the duration of the pregnancy. Generally, after delivery the hyperglycemia will resolve. This patient may be at risk to later develop type 2 diabetes if she remains overweight or obese after the pregnancy.

Patient 4 has the “other” class of diabetes, which includes mature onset diabetes of the young (MODY), and is a genetic predisposition to insulin resistance. The “other” category also includes latent autoimmune diabetes of the adult (LADA) and other endocrinopathies such as polycystic ovarian syndrome. This patient may or may not require insulin injections but will generally be able to control hyperglycemia with oral antihyperglycemics and balancing movement and meals.

Knowing the diagnostic criteria is essential to identify who qualifies as having DM and what is the best treatment strategy to control hyperglycemia. The ADA 2015 criteria approved four tests, which include:

Hyperglycemia on only one of the four tests is sufficient for a diagnosis of DM. Additional tests may be ordered to confirm the difference between type 1 and type 2 and include a C-peptide (which measures how much insulin the body can produce), auto-antibody studies (which reveal an autoimmune response seen in type 1 and LADA) and genetic studies (which may reveal a genetic disorder as in MODY). 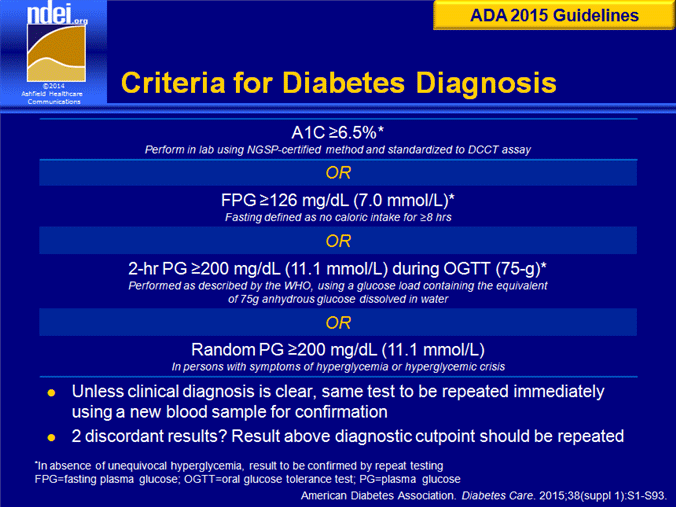 There are four major categories of diabetes: type 1, type 2, gestational, and “other.”

In the past, type 1 diabetes was called “insulin-dependent diabetes.” The ADA changed the nomenclature as more patients with type 2 became dependent on insulin for sugar regulation, which was confusing to both patients and healthcare providers; so the name reverted back to “type 1.”

Type 1 diabetes has also been called juvenile diabetes because it typically appears in children and young adults. Type 1 diabetes can present as an acute illness; however, the destruction of the beta cells may have been occurring for weeks prior to the acute symptoms.

Even before the disease shows clinical signs and symptoms, mildly elevated blood glucose (BG) levels can be detected in tests. This stage of the disease is called prediabetes. The progression of type 2 diabetes is gradual. Over the years, the individual’s prediabetes worsens, especially if the person is overweight and inactive.

Type 2 diabetes was once called “adult-onset diabetes” because the disease develops slowly and typically appears in older adults. Ninety to ninety-five percent of all present cases of diabetes are type 2; however, the age at which the condition is being diagnosed continues to lower, even including obese children. In the United States, type 2 diabetes is found in less than 2.5% of people aged 20 to 39 years, 10.5 % of people aged 40 to 59 years, and 23% of people 60 years of age or older.

Given the rapid increase in the number of people with this condition, and the increasingly younger age when the disease is diagnosed, healthcare providers need to be skilled in detection, management, education, and prevention strategies in order to decrease the overall burden on health and finances to patients and their families.

Gestational diabetes mellitus (GDM) is diabetes that develops for the first time during pregnancy and is seen as persistent hyperglycemia. Due to the overall stress of the pregnancy, and with additional risk factors similar to those of type 2 diabetes, such as obesity, sedentary lifestyle, high-fat diet, age, ethnicity, and genetic predispositions, almost 21% of all pregnancies may develop hyperglycemia.

Recommendations for GDM include:

Other Types of Diabetes

Types of diabetes that fall into the “other” class of diabetes mellitus include MODY, LADA, endocrinopathies, and impaired fasting glucose (IFG).

MODY is a genetic mutation in an autosomal dominant gene that affects insulin production. Individuals with this diagnosis are generally children less than age 25 with a family history of diabetes for generations. These children still produce some insulin and are clinically closer to a type 2. They may or may not require insulin.

LADA presents in young adults in their twenties and can be confused as type 2 because of age; however, they do not produce any insulin and are clinically similar to type 1, requiring insulin. They have often been labeled as “diabetes 1.5” because they are clinically between type 1 and type 2.

Endocrinopathies may include polycystic ovarian syndrome, pancreatic cancer or tumors, and other hormonal disruptions in insulin production. Impaired fasting glucose presents as an FBG higher than 100 mg/dl but less than 126 mg/dl, so it does not qualify as full diabetes mellitus.

A 34-year-old female patient presents with a symptoms of polyuria for 1 month and weight loss. Which diagnostic test is appropriate to diagnose this patient?

Rationale: The FBS must be administered on two separate occasions, not just one. The A1C cannot be used because symptoms have only been reported for 1 month and the A1C is most accurate over 3 months. The 2-hour postprandial also requires two occasions. The random BG with symptoms is most helpful. Symptoms alone are not adequate because the polyuria may be caused by a urinary tract infection (UTI) or other problem.

Explain in your own words, as if you were teaching a newly diagnosed patient with diabetes, what the difference is between the four classes of diabetes.