Elders and Their Care TodayPage 3 of 16

Healthy aging is not about being free of disease or infirmity but about keeping those things well controlled when they do occur so they have as little influence as possible on wellbeing.

When we think about aging and elders, regrettably we tend to focus on what people cannot do instead of what they can. While healthcare professionals may see illness or infirmity in their aging patients, the goal should always be to enable the older person to regain meaning and ease in their life to whatever extent they are able.

Healthcare professionals are helping draw attention to the need for a sea change in how society views getting older, and being older. Life is a continuum, and the final years are as much a part of it as the early years. In recent decades, we have learned a lot about the physical and mental changes of age, and indeed about the capabilities of age that were once dismissed, but there is a disconnect between what we have learned and what society believes about aging.

One difference in perception between science and society has been characterized as Embrace vs. Battle:

While experts recognize that physical and cognitive challenges accompany the aging process for most adults, they also recognize that the older years bring new opportunities and capacities for growth, contribution and self-expression. Meanwhile, the public sees the aging process as something to be confronted—an obstacle to be overcome or an opponent to be battled (Lindland et al., 2015).

Everyone has heard that we have an aging population in the United States. In some ways our public misperceptions have affected planning as well as programs for this aging demographic. The reality is that the more actively we deal with it, the better off we will be as a society and as individuals. This is a public policy issue that we all can have a hand in improving (Lindland et al., 2015; FrameWorks, 2017).

Healthy aging takes account of the reality that there is no typical older person.

The report is intended to:

The World Health Organization (WHO) defines healthy aging as “the process of developing and maintaining the functional ability that enables well-being in older age.” Further, functional ability comprises the interaction of an individual’s intrinsic capacity (mental and physical capacities) with relevant environmental characteristics, or the capability to be and do what you value, including

Individual capacities may range from robust and active to care-dependent, even among people of identical age. The diversity of capacity in older people is in large measure the result of a cumulative lifetime of advantages and disadvantages that may include environment, family of origin, sex, ethnicity, education, and financial resources (WHO, 2019, 2018, 2017). Policies, whether international, national, state, local, or institutional need to address these realities in order to have the greatest positive impact on the older people they serve.

Ageism might parallel. . . racism as the great issue of the next 20 to 30 years.

Ageism is stereotyping, prejudice, and discrimination on the basis of a person’s age. It reflects the erroneous assumption that all people in a certain group (in this case, those over 60 or 65) are identical. WHO notes that ageism is both widespread and insidious and it has harmful effects on the health of older adults. In can affect their everyday life in areas such as employment, access to social services, and media stereotyping. Ageism marginalizes and excludes elders in the very communities in which they live, negatively affecting their health and well-being (WHO, 2019a,b; FrameWorks, 2017; Achenbaum, 2015).

Ageism is everywhere and is socially normalized more than either racism or sexism due to having fewer advocates who speak out against it. Like these other -isms, ageism serves underlying social and economic purposes that legitimize and sustain inequalities. Ageism manifests itself in prejudicial attitudes and in discriminatory policies and practices that reinforce stereotypes. It is evident in personal attitudes, public policy, and in all forms of media, including social media, television, movies, books, magazines, and news outlets, where coverage has at times been designed to pit younger and older against each other (WHO, 2019a,b; Achenbaum, 2015; Robbins, 2015).

Ageism has not been well studied historically and its origins and consequences have gone unexamined. This belies the fact that attitudes of ageism were seen for centuries, reaching back to Roman times and even Neolithic cultures. It is deeply ingrained in societies around the world, not just in the West (Achenbaum, 2015). Ironically, older adults can carry over these attitudes from their youth; for example, people in their eighties who “reject senior housing because they don’t want to live with old people” (Burling, 2018).

In 2015 the American Society on Aging devoted an entire issue of its journal Generations to examining the problem of aging and its effects (ASA, 2015). That issue was inspired by a 2015 report by eight national organizations directly concerned with aging, including the American Society on Aging, AARP, the American Federation for Aging Research, the American Geriatrics Society, Grantmakers in Aging, the Gerontological Society of America, the National Council on Aging, and the National Hispanic Council on Aging (ASA, 2015; FrameWorks Institute, 2017). Collectively, the result of this report was a move to ”reframe how the public views aging, so that improvements across services, policies, and opportunities for older adults can be perceived as not only possible but also desirable” (Robbins, 2015).

Research has shown that older adults with negative attitudes about themselves may have lifespans as much as 7.5 years shorter than those who hold positive attitudes. Low expectations about aging can be linked to lower levels of physical activity, poorer diets, and less use of preventive measures such as regular checkups, seatbelt use, and moderation of alcohol intake. In addition to improving lifespan, holding positive age stereotypes has been linked to a 44% greater likelihood of fully recovering from serious disability (Ouchida & Lachs, 2015).

Numerous research studies have confirmed that misperceptions about age are widely held in the healthcare field. In healthcare settings, ageism can result in both over-treatment and under-treatment. Knowledge and attitudes about aging can affect a provider’s ability to distinguish normal age-related changes from illness or chronic disease, meaning

Ageism can take the form of a provider dismissing treatable pathology as a feature of old age, or treating expected changes of aging as though they were diseases. (Ouchida & Lachs, 2015; WHO, 2019b)

Pain is routinely under-treated in older adults, a situation exacerbated by the unfortunate dovetailing of patients’ misperceptions of aging with those of their providers. Another common idea is that older adults are not sexually active, which means chances to address bothersome but easily treatable problems are missed, as are potentially serious diagnoses of sexually transmitted diseases, including HIV (Ouchida & Lachs, 2015).

On the other hand, there are demonstrated problems of over-treatment, which, among other things, can incur unnecessary expense for patients and insurers, including Medicare. Unnecessary screenings, aggressive treatments not desired by patients, and excessive and potentially harmful medication use are among the issues of concern (Ouchida & Lachs, 2015).

The best place to begin addressing this problem may be with more effective communication between older patients and their healthcare providers. Providers obviously need to screen for cognitive and sensory impairment but it is important to begin with no assumptions. Speaking loudly or in an exaggerated way, or speaking to a caregiver as if the patient were not there, at all are perceived as demeaning by patients and have been demonstrated to impact care negatively. Even a third party’s presence can have negative effects on patient well-being and should be allowed thoughtfully (Ouchida & Lachs, 2015; WHO, 2019b).

Our deeply ingrained ageist thinking—and the tendency to deny our own aging—affect many issues related to quality of life for an aging population. Discrimination in the workplace affects economic well-being and mental and physical health. Lack of recognition, training, and support for caregivers, whether family members or paid helpers, can have long-term consequences for health. A failure to address the critical issue of long-term care is likely to haunt future thinking. Curiously, about 50% of Americans over age 40 think “almost everyone” is likely to require long-term care as they get older, yet only 25% believe they will need it! In reality, research shows that 70% of adults over 65 will require some type of long-term care (Blancato & Ponder, 2015).

Nationwide shortage of trained geriatricians is critical in healthcare. There are approximately 7,300 certified geriatricians practicing in the United States (as of 2015) and only 50% of those who are fellowship-trained are re-certifying. Even though fellowships have increased slightly, the number filled has remained the same. Not everyone needs to be a specialist, but most healthcare providers, especially nurses of all types plus OTs and PTs, will routinely work with older patients in the course of their regular practice—and better training will help everyone. In addition to more practitioners, more teachers need to inspire medical students to join the field (Ouchida & Lachs, 2015).

Excluding older adults who have multiple chronic illnesses from trials that help to establish clinical practice guidelines (CPGs) is another negative associated with ageism. CPGs help primary care providers and others to make treatment potentially safer and more effective for the patient (Ouchida & Lachs, 2015).

Clearly, healthy aging and combating ageism is a multi-faceted challenge that requires a new way of looking at how we liv— in our homes, our communities, our larger society, and even the world. There are many options for changing and improving lives that require the cooperation of everyone—individuals (regardless of age), community groups, governments at all levels, and, of course, all members of the healthcare profession. 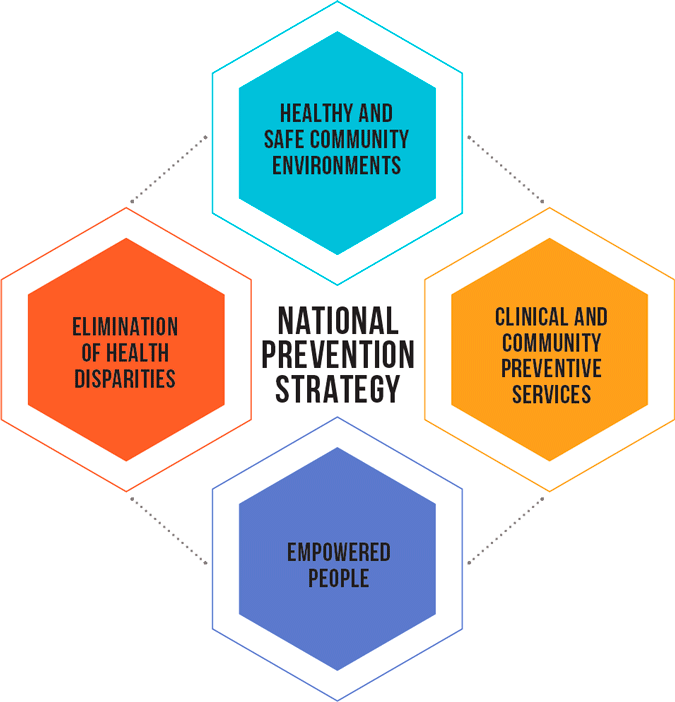 Chart is a simplified version of the chart on p.19 of Healthy Aging in Action: Advancing the National Prevention Strategy. The complete chart is available at https://www.cdc.gov/aging/pdf/healthy-aging-in-action508.pdf