Elders and Their Care TodayPage 4 of 16

Population aging has been defined as the “increasing share of older persons in the population” (WHO, 2015); most sources add that it is due to declines in fertility and increases in life expectancy (Roberts et al., 2018; Nikolova, 2016), and others refer to the effects in the United States of the Baby Boom generation. Overall, these are simple definitions for a phenomenon far more complex in its dynamics and consequences.

A data picture is useful if we don’t let a crush of numbers mask the implications and challenges. In contrast to the rapid growth of the older population forecast for the United States in the period to 2050, there will be almost flat growth of the youth population (those under age 20) and a moderate increase in those age 20 to 64 (the working-age population (Roberts et al., 2018).

U.S. on track to have oldest population

A Picture from Data

Based on Census Bureau data for 2016 in the United States, more than half the older population was age 65 to 74 and more than half of them were female. That disparity increases with age due to the higher life expectancy of females. (Note: this is often expressed as the sex ratio, which is the number of males per 100 females.)

Some highlights from the Census Bureau report include:

Each of these items highlight issues that can come into play in personal, social, and healthcare interactions for the older members of the population—income, education, living situation, migration patterns that might affect language barriers, disability status, understanding of and access to computers and the Internet, among others.

The significance of race and ethnic data is that it points us to the critical issue of health disparities.

Health disparities related to race, ethnicity, socioeconomic status, gender, and sexual orientation, among others, compound health problems that can occur with age.

Health disparities are “differences in health outcomes and their determinants between segments of the population, as defined by social, demographic, environmental, and geographic attributes,” while health equity is achieved when everyone has the opportunity to be as healthy as possible (CDC, 2016a,b).

To obtain high-quality care, Americans must first gain entry to the healthcare system. Measures of access to care tracked in the Agency for Healthcare Research and Quality’s (AHRQ) National Healthcare Quality and Disparities Report (QDR) include having health insurance, having a usual source of care, encountering difficulties when seeking care, and receiving care as soon as wanted. Historically, Americans have experienced variable access to care based on race, ethnicity, socioeconomic status, age, sex, disability status, sexual orientation, gender identity, and residential location. Trends show that, although some gaps are getting smaller, disparities remain (AHRQ, 2017).

Health disparities are preventable differences in the burden of disease, injury, violence, or in opportunities to achieve optimal health experienced by socially disadvantaged racial, ethnic, and other population groups and communities. Health disparities exist in all age groups, including older adults. Even though life expectancy and overall health have improved in recent years for most Americans, not all older adults are benefitting equally because of factors such as economic status, race, and gender (CDC, 2017c).

Person-centered care is most improved

The AHRQ’s QDR looks at strengths and weaknesses in access and in quality, and it also looks at health disparities. In regard to access, 43% of access measures showed improvement (2000–2016), 43% did not show improvement, and 14% worsened. Quality improved overall from 2000 through 2014–2015 but the pace of improvement varied by priority area: person-centered care, patient safety, healthy living, effective treatment, care coordination, and care affordability. Person-centered care showed improvement in the greatest number of care measures (70%) (AHRQ, 2017).

The quality of healthcare is evaluated through more than 250 individual quality measures that fall into the six priority areas. Disparities were identified by comparing measures in regard to race/ethnicity, income, and status. Overall, some disparities were getting smaller from 2000 through 2014–2015, but they persist, especially for poor and uninsured groups in all the six quality priority areas (AHRQ, 2017).

Data for the most recent year show that disparities remain for about 40% of quality measures for blacks. The largest disparities for blacks compared with whites include: rate of new HIV cases per 100,000 over age 13; rate of HIV infection deaths per 100,000; rate of adults with potentially avoidable hospital admissions for hypertension per 100,000. Overall, 55% of quality measures improved for blacks. The gap between blacks and whites remained the same for 75% of measures with 3 measures showing an increasing gap. 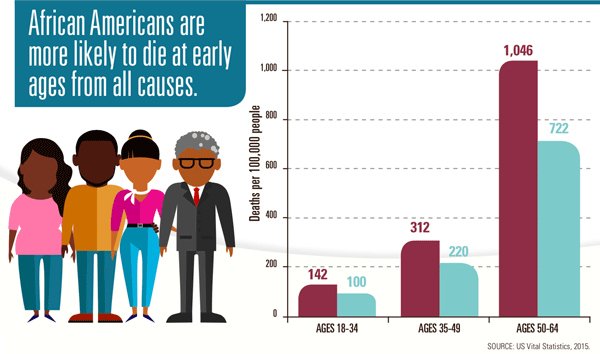 The brief look above at health disparities by racial and ethnic groups is just one category in which health disparities are identified. Others include age, gender, sexual orientation, disability status, socioeconomic status, and geographic location. While many of these accompany a person throughout life, joining the “older population” adds a new element for an individual to manage in regard to staying healthy and obtaining appropriate healthcare when needed.

Value of a lifecycle focus

Effects of change can sometimes be bidirectional, as for example when poor health leads to a decline in socioeconomic status. In other cases, certain social contexts such as geography, family, neighborhoods, and schools moderate the effects of race, education, or social class on health outcomes. Additional research is ongoing and much needed in regard to health disparities, and the value of a lifecycle focus is becoming evident (NIA, 2016).

Oral health is a glaring health disparity for older adults that is often overlooked. The National Prevention Council notes that more than 37% of adults age 65 and older have not had a dental visit in the preceding 12 months—a fact borne out by an AARP survey conducted in late 2018 that noted 16% had not seen a dentist in over 5 years (NPC, 2016; AARP, 2019).

Medicare does not provide dental coverage for beneficiaries and many older adults cannot afford to pay outright for dental care or for dental insurance. The AARP survey found that the vast majority of older adults value good oral care and are not happy being unable to obtain it. In fact, 62% said they would be willing to pay additional Medicare premiums if a dental benefit was added (AARP, 2019).

Poor oral health can have a negative effect on general well-being and research has shown a clear connection with chronic diseases and conditions prevalent among older adults, including diabetes and heart disease. Older adults often either have no dental insurance or it is not adequate. For those who may have had other factors contributing to poor oral health when they were younger the situation may worsen (NPC, 2016; AARP, 2019).

Minorities most at risk as they age

Older adults who are members of a racial or ethnic minority or have a lower socioeconomic status are more likely to have certain chronic diseases, and non-Hispanic whites and blacks at age 65 on average live 1 year less than Hispanics who have reached age 65. Lesbian, gay, and bisexual elders have higher rates of disability, cardiovascular disease, obesity, and depression than do older heterosexual people (NPC, 2016).

For older adults already experiencing health disparities, changed situations that accompany aging can make their situation worse. A restricted retirement income that leads to a more isolated living situation, or the development of a disability, will exacerbate other factors already in play. Healthcare providers have an important role in identifying and addressing disparity issues in older adults and should be provided with the necessary education and training to do this (NPC, 2016).

[This section is taken from healthypeople.gov, 2019.]

LGBT individuals encompass all races and ethnicities, religions, and social classes. Sexual orientation and gender identity questions are not asked on most national or state surveys, making it difficult to estimate the number of LGBT individuals and their health needs.

Research suggests that LGBT individuals face health disparities linked to societal stigma, discrimination, and denial of their civil and human rights. Discrimination against LGBT persons has been associated with high rates of psychiatric disorders, substance abuse, and suicide. Experiences of violence and victimization are frequent for LGBT individuals, and have long-lasting effects on the individual and the community. Personal, family, and social acceptance of sexual orientation and gender identity affects the mental health and personal safety of LGBT individuals.

The LGBT companion document to Healthy People 2010 highlighted the need for more research to document, understand, and address the environmental factors that contribute to health disparities in the LGBT community. As part of this work, we need to increase the number of nationally representative health-related surveys that collect information on sexual orientation and gender identity (SOGI).

The many benefits of addressing health concerns and reducing disparities include:

Efforts to improve LGBT health include:

To address LGBT health issues effectively, we must securely and consistently collect SOGI information in national surveys and health records. This will allow researchers and policy makers to accurately characterize LGBT health and disparities.

Understanding LGBT health starts with understanding the history of oppression and discrimination that these communities have faced. For example, in part because bars and clubs were often the only safe places where LGBT individuals could gather, alcohol abuse has been an ongoing problem.

Social determinants affecting the health of LGBT individuals largely relate to oppression and discrimination. Examples include:

The physical environment that contributes to healthy LGBT individuals includes:

LGBT health requires specific attention from healthcare and public health professionals to address a number of disparities, including the following:

A number of issues will need to continue to be evaluated and addressed over the coming decade, including: