Stroke: Emergency Care and RehabilitationPage 12 of 27

In the past it was thought that the brain was completely formed by adulthood and was therefore incapable of forming new connections. It is now known that the brain adapts, compensates, and learns throughout life, a process called neural plasticity or neural modifiability. Neural plasticity is described as “a continuum from short-term changes in the efficiency or strength of synaptic connections, to long-term structural changes in the organization and numbers of connections between neurons” (Shumway-Cook & Woollacott, 2012).

New technologies, such as noninvasive exploration of the brain, are increasing our understanding of neural plasticity and its relationship to stroke recovery (Takeuchi & Izumi, 2013). Studies in animals using these technologies have yielded new information about plasticity:

Various stroke rehabilitation techniques have been developed based on the concept of neural plasticity. However, the effectiveness of interventions among patients with stroke varies widely because the mechanisms underlying motor recovery are diverse and, as yet, not well understood.

Following a stroke, abnormal muscle tone is a common complication. Many of those who survive a stroke experience an abnormal increase in muscle tone referred to as spasticity or hypertonia. Additionally, many stroke patients experience an abnormal decrease in muscle tone, which is referred to as paresis or hypotonia. Both spasticity and paresis typically occur on one side of the body, usually the opposite side from the brain lesion.

There are a number of other abnormal signs associated with muscle over-activity:

*Upper motor neuron: motor neurons that originate above the level of the spinal cord in the brainstem or the motor cortex.

Spasticity is defined as a velocity-dependent increase in tonic stretch reflexes with exaggerated tendon jerks, resulting from hyper-excitability of the stretch reflex. Also called hypertonia, it is a type of abnormal tone that occurs in a significant percentage of people following a stroke; up to 42% of stroke survivors exhibit abnormal hypertonia (Pundik et al., 2014). Spasticity is part of an overall disruption in movement that includes weakness, stiffness, contracture, decreased smoothness of movement, and dysfunction in the patterns of muscle recruitment (Marciniak, 2011).

Contracture of the Wrist 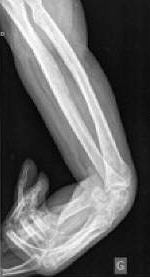 An x-ray showing spasticity and contracture of the wrist of a 42-year-old man following a stroke. Source: Wikiversity.

In addition to velocity-dependent increases in tonic stretch reflexes, spasticity is a length-dependent phenomenon. For example, in the quadriceps, spasticity is greater when the muscle is short than when it is long. This is probably one of the mechanisms underlying the so-called clasp knife phenomenon. Bending the knee, at first (when the muscle is short), a great resistance is met. Then, when the quadriceps lengthens, the resistance suddenly disappears. Spasticity is most often seen in the flexor muscles of the upper limb and in the extensor muscles of the lower limb (Trompetto et al., 2014).

Rehabilitation is a challenging task for those who exhibit spasticity. It can limit practice of coordinated movement, restrict movement, and hinder functional recovery. This abnormally elevated muscle tone impacts quality of life because it affects many aspects of everyday function, produces pain and discomfort, and prevents normal movements (Pundik et al., 2014).

In terms of post stroke recovery, some studies show that a more complete restoration of motor function is achieved when spasticity is absent (Pundik et al., 2014). Other reports suggest adverse effects on recovery. A longitudinal study of 95 subjects found that, at 3 months post stroke, patients without spasticity had significantly better motor and activity scores than patients with spasticity (Belagaje et al., 2014).

Multiple medications and treatments have been developed and are used routinely in the clinical setting for post stroke spasticity, including baclofen, tizanidine, dantrolene, and benzodiazepines (Francisco & McGuire, 2012). Improvements in passive function only and reduction in disability after botulinum toxin administration to spastic muscles have been reported (Belagaje et al., 2014).

In their approval of botulinum toxin for post stroke spasticity, the Food and Drug Administration (FDA) cited three studies that showed improvement in upper limb muscle tone as measured by Modified Ashworth Scale* and physician global assessment of treatment response. It is still unclear whether the treatments improve functional outcomes after a stroke (Belagaje et al., 2014).

*Modified Ashworth Scale: a clinical tool used to assess spasticity by rating the perceived level of resistance to passive range-of-motion about a single joint.

Paresis or paralysis following a stroke is defined as “decreased voluntary motor unit recruitment, which reflects the inability or difficulty in recruiting skeletal motor units to generate torque or movement” (Shumway-Cook & Woollocott, 2012). It is the result of damage to the part of the nervous system and brain associated with motor control. Depending on the size and location of the lesion, weakness can range from complete loss of motor activity (paralysis) to partial loss (paresis).

Weakness and loss of dexterity are usually immediately apparent following a stroke and often contribute to decreased active and passive range of motion of the involved joints. Profound hemiparesis can lead to joint contractures, which severely impair mobility and may lead to pressure ulcers. Passive and active range of motion exercises are used to reduce the risk of secondary musculoskeletal impairment from decreased joint range of motion (Trompetto et al., 2014).

Paresis affects all activities of daily living. For example, a patient with hemiparesis bears more weight on the opposite lower extremity, which can lead to asymmetry and impaired posture. The weight-bearing asymmetry is associated with the increased postural sway and poor balance. The inability of the non-affected lower extremity to compensate for the paretic limb also contributes to the postural imbalance (Arya et al., 2014).

Following a stroke, the brain immediately goes to work trying to compensate for neurologic changes. But the brain doesn’t always choose the best compensation; it chooses those that are fast and efficient. In some cases the compensation can be maladaptive, creating an unwanted result or consequence such as loss of function or injury (Takeuchi & Izumi, 2012). Maladaptive plasticity can trigger behavioral changes or even development of disease symptoms as a result of neurophysiologic changes in the human brain (Cerasa et al., 2014).

Several studies have reported that maladaptive plasticity weakens motor function and limits motor recovery after stroke. Several mechanisms for maladaptive plasticity have been proposed, including (1) compensatory movements, (2) changes to ipsilateral motor projections, and (3) competitive interaction between the damaged and undamaged hemispheres of the brain (Takeuchi & Izumi, 2012).

Compensation is the appearance of new motor patterns resulting from the adaptation of remaining motor elements or substitution, meaning that functions are taken over, replaced, or substituted by different end effectors or body segments. It is common in stroke patients with severe impairment that compensatory movements by the less-affected side of the body be encouraged to maximize functional ability (Takeuchi & Izumi, 2012).

In the lower limb, stroke patients often use larger arm and leg swing amplitudes on the non-paretic side to increase walking speed. Although compensatory movements may help stroke patients perform tasks in the short term, the presence of compensation may be associated with long-term problems such as reduced range of joint motion and pain (Takeuchi & Izumi, 2012).

Intense use of the non-paretic limb might have harmful effects on motor recovery of the paretic limb and may drive neural plasticity in a direction that is maladaptive for functional outcome. Compensatory movement patterns may improve performance of daily activities after stroke but may also induce maladaptive plasticity and limit motor recovery (Takeuchi & Izumi, 2012).

*Interjoint coupling or coordination: the ability to move joints smoothly and in coordination with one another.

Inter-hemispheric competition is thought to be the result of changes in both hemispheres after stroke. This is based on the observation that stroke patients with poor motor function show increased activation of the unaffected hemisphere. This hyper-excitability has a negative correlation with motor function after stroke. Compensatory usage of the non-paretic side may promote the unbalance between the hemispheres (Takeuchi & Izumi, 2012).

In the past, the practice of movement patterns was a central theme in stroke rehabilitation. These techniques, developed over decades, are based on the reflex-hierarchical theory of motor development, which posits that the nervous system is organized in a top-down manner and when damage occurs in the brain, “normal reflexes become exaggerated and so-called pathological reflexes appear” (Shumway-Cooke & Woollacott, 2012). Although therapeutic techniques based on this approach results in clear improvements, it is now thought that task-specific training yields better results.

Task-specific or task-oriented training is an approach that emphasizes the practice of functional tasks related to mobility rather than movement patterns. It is also referred to as the systems approach. This approach assumes that movement is an interaction of many different systems and that movement is organized around a behavioral goal and is constrained by the environment. In the task-oriented approach, the patient learns by actively trying to solve the problems associated with the functional task (Shumway-Cooke & Woollacott, 2012).

Environments that provide greater opportunity for a variety of activities are referred to as enriched environments. These types of environment provide stimulating motor, cognitive, sensory, and social activities and increasingly are thought to play an important role in stroke rehabilitation.

Short-term changes include the immediate expression of early genes, alterations in synaptic efficacy, and long-term potentiation, whereas long-term changes include an increase in dendritic arborization, spine density, axonal sprouting, and the number of synapses per neuron. These modifications are likely due to the availability of greater sensory stimuli and more learning experiences, which in turn are expressed as structural changes within the brain (Teasell & Hussein, 2013b).

In a 2013 study involving 29 patients, the difference in change of physical, cognitive, and social or any other activity were directly observed in stroke patients located in a mixed rehabilitation unit and exposed to an enriched environment versus a non-enriched environment. The stroke patients in the enriched environment were more likely to engage in social activities, less likely to be inactive and alone and less likely to be asleep than patients without enrichment. The preliminary trial suggest that the comprehensive model of enrichment developed for use in a rehabilitation unit was effective in increasing activity in stroke patients and reducing time spent inactive and alone (Teasell & Hussein, 2013b).

Clinically, care administered by a well-coordinated, multidisciplinary team can provide an enriched environment for patients with stroke. Care in an organized stroke unit provides individuals with a clear understanding of what is expected of them during task-specific training, resulting in neural plasticity that improves their performance (Takeuchi & Izumi, 2013).

Involving patients in the setting of interdisciplinary goals has been shown to encourage motivation and engagement in therapy, resulting in better rehabilitation outcomes. The reported benefits of stroke unit care extend to patients of all ages and to patients with varying stroke severity. It is increasingly clear that stroke rehabilitation programs should include meaningful, repetitive, intensive, and task-specific training in an enriched environment in order to promote neural plasticity and motor and functional recovery (Takeuchi & Izumi, 2013).