Stroke: Emergency Care and RehabilitationPage 4 of 27

There are two main types of stroke: ischemia and hemorrhage. An ischemic stroke is caused by interruption of blood flow and decrease of oxygen to the brain. If not treated rapidly, ischemia ultimately leads to infarction, in which brain cells are replaced by a fluid-filled cavity (or infarct). A transient ischemic attack (TIA) is also caused by blockage or interruption of blood flow to the brain. A TIA lasts only a short time but should be treated as a serious neurologic event. Hemorrhagic stroke occurs when a blood vessel in the brain leaks or ruptures, spilling blood into adjacent brain tissue.

The loss of oxygen and nutrients following a stroke begins a process that destroys neurons within the brain. Some cells die immediately, while others are damaged and remain at risk for death if treatment is delayed. The damaged neurons surrounding dead cells make up the ischemic penumbra (see illustration below) and can linger in a compromised state for several hours. With timely treatment these neurons can be saved (NINDS, 2015a).

Acute ischemic stroke is characterized by the sudden loss of blood circulation to a location in the brain, typically in a highly vascular area, resulting in a corresponding loss of neurologic function based on the area involved. Individuals having an ischemic stroke experience a sudden onset of neurologic deficit and often have co-morbid hypertension, diabetes mellitus, valvular heart disease, or atherosclerosis. Distinctive neurologic signs typically indicate the region of the brain involved but not necessarily the cause. Strokes are divided into two types: hemorrhagic or ischemic. Acute ischemic stroke is caused by a thrombotic or embolic occlusion of a cerebral artery.

Ischemic strokes occurring in the carotid circulation are the most common type of ischemic stroke, accounting for approximately 70% of all cases (Baird, 2013). They are usually caused by occlusion of one of the major intracranial arteries or one of the small single penetrating arteries.

Depending on the location of the blockage, ischemic stroke can affect sensation, speech, behavior, thoughts, memory, or emotions. One side of the body may become paralyzed or weak. The five most common signs and symptoms of ischemic stroke are acute onset of:

Blood clots can cause ischemia in two ways. In the first, a clot that forms in a part of the body distant from the brain travels through the blood and becomes wedged in an artery supplying blood to the brain. This free-roaming clot is called an embolus and often forms in the heart. An ischemic stroke caused by an embolus is also referred to as an embolic stroke.

The Brain During an Embolic Stroke

This illustration shows how an ischemic stroke can occur in the brain. If a blood clot breaks away from plaque buildup in a carotid (neck) artery, it can travel to and lodge in an artery in the brain. The clot can block blood flow to part of the brain, causing brain tissue death. Source: NIH, n.d.

The second kind of ischemic stroke, called a thrombotic stroke, is caused by thrombosis, the formation of a blood clot in one of the cerebral arteries that stays attached to the artery wall until it grows large enough to block blood flow (NINDS, 2015a).

Atherosclerosis is the most common blood vessel disease that causes stenosis. In atherosclerosis, deposits of plaque build up along the inner walls of large- and medium-sized arteries, causing thickening, hardening, and loss of elasticity of artery walls along with decreased blood flow (NINDS, 2015a).

Stenosis in a Section of an Artery 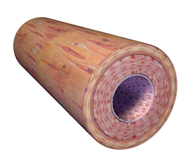 Left: A sectioned elastic artery. Elastic arteries are vessels that can handle a great deal of pressure (eg, the aorta, which takes pressure directly from the constant beating of the heart). Right: An atherosclerotic plaque, with the plaque forming on the inside wall. Illustration provided by 3DScience.com. Used with permission.

Stroke recurs in as many as 10% of stroke survivors in the first 12 months after the initial event, with an incidence of 4% per year thereafter (Baird, 2013).

The annual incidence of TIA in the United States is estimated to be 200,000 to 500,000. About half of those experiencing TIA don’t report it, representing lost opportunities for early intervention and stroke prevention. The actual incidence of TIA is unknown due to under-reporting (Sonni & Thaler, 2013).

A transient ischemic attack (TIA) is an ischemic stroke that lasts only a few minutes. Its onset is acute and without warning, and recovery is usually rapid. TIAs occur when the blood supply to part of the brain is briefly interrupted—usually by an embolism. TIA symptoms are similar to those of stroke but do not last as long. Essentials features of TIA include:

In the past, TIA was diagnosed solely by the sudden onset of symptoms that resolved spontaneously within 24 hours (Simmons et al., 2012). This definition is now considered inadequate because we now know that even brief periods of ischemia can result in permanent brain injury. Currently the definition is tissue-based rather than time-based.

TIA now includes transient episodes of neurologic dysfunction caused by focal brain, spinal cord, or retinal ischemia without infarction (von Weitzel-Mudersbach et al., 2013). This expanded definition is intended to increase opportunities for timely intervention that could prevent a TIA from evolving into a stroke. TIA may be a precursor to stroke because both share the same cerebrovascular disease processes.

Aspirin and modification of risk factors such as high cholesterol and hypertension reduce the likelihood of heart attack and stroke (Farina, 2014).

A TIA can occur in either the anterior or the posterior circulation, and symptoms vary depending upon the location of the blockage. If ischemia affects the carotid (anterior) circulation, the symptoms include weakness and heaviness on the contralateral arm, face, or leg. Numbness and sensory changes may also occur, either alone or in combination with motor deficit (Papadakis et al., 2015).

Other symptoms may include monocular visual loss, dysphagia, and slowness of movement. Examination during a TIA may reveal sensory changes, hyper-reflexia, extensor plantar response, and flaccid weakness. Once the symptoms pass, examination will reveal no neurologic deficits, but carotid bruit or cardiac abnormalities may be present (Papadakis et al., 2015).

Because there is no way to tell whether symptoms are from a TIA or an acute stroke, people should assume that all stroke-like symptoms signal an emergency and should not wait to see if they go away. A prompt evaluation is necessary to identify the cause of the TIA and determine appropriate therapy (Papadakis et al., 2015).

TIA produces some or all of these symptoms:

The occurrence of a TIA is a major indicator of the overall health of the cardiovascular system, and many strokes can be prevented by heeding warning signs and treating underlying risk factors. Drug therapy or surgery to reduce the risk of stroke may be indicated. The use of antiplatelet agents, particularly aspirin, is a standard treatment for patients at risk for stroke, and people with atrial fibrillation may be prescribed anticoagulants (NINDS, 2015b).The American Heart Association/American Stroke Association (AHA/ASA) support treatment with aspirin alone as monotherapy, or combined therapy which includes clopidogrel or dipyridamole as first-line interventions for prevention of secondary ischemic events (AHA/ASA, 2014).

People who have suffered a TIA are at increased risk for stroke, especially in the first year after the event. In the first 3 months, stroke risk is more than 10%, with the highest risk in the 2 days following the TIA (NINDS, 2015b). After the first year, the risk of a subsequent stroke decreases to about 8% per year. Patients with TIA who are considered at high risk for a stroke include those over the age of 60, diabetics, or those with TIAs lasting longer than 10 minutes and with weakness or speech impairment (JAHA, 2011).

Post-TIA stroke risk is based on assessment of both modifiable (hypertension, diabetes, abnormal lipid profile, smoking, sedentary lifestyle and obesity) and non-modifiable (age, gender, race/ethnicity and heredity) risk factors. Again, the goal is for intervention and prevention of progression to stroke with permanent neurologic deficits (Rhoney, 2011; Sonni & Thaler, 2013).

There are two types of hemorrhagic strokes—intracerebral and subarachnoid hemorrhages. Bleeding from ruptured brain arteries can either go into the substance of the brain or into the various spaces surrounding it.

A hemorrhagic stroke occurs when a blood vessel in the brain bursts or leaks, causing blood to accumulate, compressing the surrounding brain tissue, and killing neurons. Blood also irritates delicate brain tissue and causes cerebral edema. Tissue swelling—along with the hematoma from the leaking blood—increases the mass effect, causing further damage and a general increase in intracranial pressure. Brain cells beyond the rupture are deprived of blood and are also damaged (Mayo Clinic, 2014).

Hemorrhage can occur in several ways. One common cause of hemorrhage is a bleeding aneurysm—a weak or thin spot on an artery wall. Over time, these weak spots stretch or balloon out under high arterial pressure and their thin walls can rupture and spill blood into the surrounding brain cells (NINDS, 2015b). Aneurysms affect as much as 1% of the population and are sometimes hereditary. Studies have shown that the risk an aneurysm will rupture is related to its size and shape, its location, and the person’s age (NINDS, 2009).

This shows how a hemorrhagic stroke can occur in the brain. An aneurysm in a cerebral artery breaks open, which causes bleeding in the brain. The pressure of the blood causes brain tissue death. Source: NIH, n.d.

Hemorrhage also occurs when an arterial wall breaks open. Plaque-encrusted arteries eventually lose their elasticity and become brittle, thin, and prone to cracking. Hypertension increases the risk that a brittle artery wall will give way and release blood into the surrounding brain tissue (NINDS, 2015b).

In the absence of neurovascular abnormalities such as aneurysm or angioma, nontraumatic intracerebral hemorrhage is most commonly caused by hypertensive damage to blood vessel walls (Liebeskind, 2014). A significant increase in blood pressure over time can cause hemorrhage, which often occurs after activity.

Bleeding into the deep portions of the brain causes visual loss of conjugate lateral gaze, loss of upward gaze, downward deviation of the eyes, lateral gaze palsies, and unequal pupils. If hemorrhage is in the cerebellum, there may be sudden onset of nausea and vomiting, headache, disequilibrium, and loss of consciousness. Treatment for hemorrhage is generally conservative and supportive. Surgical intervention may be indicated in the presence of a hematoma, especially in the cerebellum. The incidence of intracerebral hemorrhage has increased by 18% in the past 10 years, possibly because of increase in the number of elders who may lack adequate blood pressure control, as well as the increasing use of anticoagulants, thrombolytics, and antiplatelet agents (JAHA, 2011a).

The first sign of subarachnoid hemorrhage is typically a severe headache with a split-second onset and no known cause. Neurologists call this a thunderclap headache and it demands immediate medical attention. About one-half of patients lose consciousness, and vomiting can present (Papdakis et al., 2015). The rupture may occur in an arteriovenous malformation, but typically it is caused by an aneurysm.

Risk factors for both ischemic stroke and intracerebral hemorrhage increase with age. The risk of both types of stroke doubles for each successive decade after age 55 years (JAHA, 2011b). Some risks factors can be modified while others cannot. Risk factors that cannot be modified include age, gender, race/ethnicity, and family history of stroke. In contrast, other risk factors for stroke (eg, high blood pressure, cigarette smoking) can be changed or controlled by the person at risk.

The most important risk factors for stroke are age, hypertension (HTN), diabetes, heart disease, and cigarette smoking. Others include heavy alcohol consumption, high blood cholesterol levels, and illicit drug use. When someone has more than one risk factor their overall risk of stroke is amplified. This means that the multiple risk factors compound their destructive effects and create an overall risk greater than the simple cumulative effect of the individual risk factors.

In 2014 the AHA/ASA issued guidelines for the reduction of stroke risk aimed specifically at women. These gender-specific recommendations include the following