Stroke: Emergency Care and RehabilitationPage 24 of 27

Following a stroke, a person’s life is drastically disrupted, first by a medical emergency, and then by weeks, sometimes months, of intensive therapy in an unfamiliar setting. Young, energetic healthcare providers are often unaware of the stress this places on patients and their families. Treatment and rehabilitation is an extended, arduous process, demanding significant personal investment from the patient (Gallacher et al., 2013). This personal investment and the problems that arise as a result of treatment are referred to as treatment burden.

Treatment burden is the effort those with chronic illness must make to manage their condition. It describes the difficulties faced by patients and their caregivers as they attempt to follow the complicated management strategies developed for rehabilitation. Burden is increased significantly when a patient has multiple co-existing illnesses. Unfortunately, treatment burden can overwhelm patients (and their families), a situation that leads to poor adherence to therapies and poor outcomes (Gallacher et al., 2013).

Treatment burden, when described in terms of patients and their family members, has four components: (1) making sense of stroke management and the plan of care, (2) interacting with others, (3) enacting management strategies, and (4) reflecting on management. 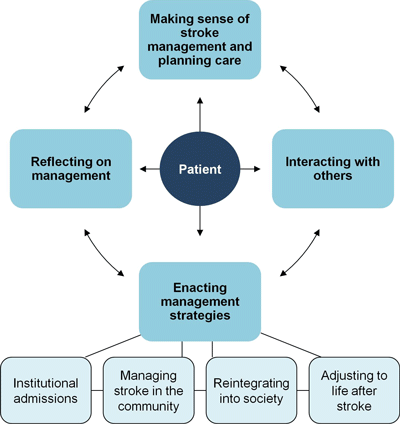 Following a stroke, patients and family members are often eager for information from their healthcare providers. They want to understand what happened, what to expect, and how to participate in the goals set by those managing their care.

In several studies, stroke patients reported that information about stroke was lacking, inadequate time was allocated, timing was inappropriate, or information was given in a form that was incomprehensible. When asked about their stroke, women (more often than men) report a lack of information from medical staff. Family education also appears to be insufficient, with patients describing the need to research information due to its lack from healthcare providers (Gallacher et al., 2013).

In other studies, patients reported that access to information following a consultation was insufficient, resulting in the need for them to spend time seeking information themselves and attempting to make personal sense of the array of changes that are occurring in their lives. Patients described difficulty making sense of and differentiating between the roles of different individuals and services, for example, who to contact for advice once discharged from hospital. A lack of continuity of care for patients and poor communication between services resulted in patients receiving conflicting information from different parties, making it harder to understand the necessary processes that promote recovery (Gallacher et al., 2013).

My mother-in-law recently had a stroke. She lives in an area of the country with good healthcare services for older adults so we assumed she would get really good care. The hospital care was good, followed by inpatient rehabilitation at the same hospital. That was also pretty good—there was a knowledgeable case manager who helped us plan the next step.

Everything fell apart when my mother-in-law was transferred to a highly recommended skilled nursing facility for rehab. We toured the facility—it was clean and really nice looking. But we soon found out that it was significantly understaffed—particularly in the evening, at night, and on weekends. There was no case manager, the doctor wasn’t involved at all, and the “discharge planner” didn’t appear to know anything about rehab, equipment, or discharge planning. There was no therapy on Saturday and Sunday and no activities in the afternoon or evening.

The most frustrating thing was trying to figure out who did what. We asked for a weekly report from rehab but when they called they didn’t identify themselves and we often didn’t know who we were talking to. Nobody seemed to know what anybody else was doing and they didn’t seem to know much about the kind of stroke my mother-in-law had, which was in the brainstem.

I’ve worked in healthcare all my adult life but even so it’s been really hard. I can’t imagine how people cope who don’t know the healthcare system. I’m kind of depressed that things were so disorganized and I’m ashamed of my profession for not doing better.

Along with making sense of stroke and its management, a great deal of effort is required to engage with a range of health professionals both in the hospital and in the community. One study reported that women are more likely to form an alliance with healthcare assistants, while men form alliances with nurses and therapists or other patients. Men more frequently reported trying to exert influence over their care, while women took a more passive role. Whatever the patient preference, the literature suggests that patients are not adequately consulted about their desires to be involved in decisions about care or about their treatment priorities and goals (Gallacher et al., 2013).

Stroke patients are involved in extensive inpatient rehabilitation, attending therapy, taking medications, and working arduously to regain lost functions. During the rehabilitation process patients must adjust to their new physical abilities and learn self-care practices to prepare for discharge.

Patients must fit into the routines set by institutions and many describe negative environmental circumstances such as unfamiliarity with various gadgets, long waiting times for personal care, inadequate support during mealtimes, poor quality of hospital food, a lack of stimulating activities, and the loss of autonomy, privacy, and dignity. These complaints were similar in the hospital and nursing home setting, with a particular complaint in nursing homes being a lack of autonomy, with care that is regarded as too paternalistic (Gallacher et al., 2013).

The transition from inpatient care to the home is an important and often challenging time for patients. Generally, patients reported discharge services as poorly coordinated, badly managed, and inadequate for preparing patients for life back in the community. Studies from a variety of countries and healthcare systems described it as difficult for patients to gain access to advice and services once discharged into the community (Gallacher et al., 2013).

More Perspective from a Family Member

When my mother-in-law was ready to go home there was zero communication from the doctor, nurses, or therapists and absolutely no help from the “discharge planner.” My mother-in-law was scheduled to be released on a Tuesday but the previous week, despite many calls to the discharge planner, nobody returned our calls. We ended up calling the doctor about 20 times for orders and spent hours on the phone trying to get the right equipment ordered. When my mother-in-law finally got home it took another week of phones calls to get everything she needed. We still don’t have prescriptions for her medications and we’re stuck between 2 doctors and an equipment company that says they can’t provide the ordered equipment. At the moment we’re paying privately for a hospital bed and we borrowed the other equipment we need. I don’t know why we didn’t get more help.

My mother-in-law’s new doctor ordered home health and the local hospital-based home health agency set things up pretty quickly. But now we’re inundated with PT, OT, speech, nursing, and a home health aide—without any pattern to the appointments. They call early in the morning, don’t identify who they are, and want to come right away. They all come in one or two days and then don’t show up for a week. Is it too much to expect healthcare professionals to identify themselves by name and profession when they call and to coordinate their visits? On top of all that, none of them knew much about stroke. It’s all very stressful.

In this period of time after discharge from inpatient care, the patient schedule is extremely busy with healthcare appointments, with patients being required to negotiate numerous therapists. As mentioned earlier, poor knowledge about available services, poor access to care, a lack of continuity, and poor communication between therapists are described as frequent and problematic issues (Gallacher et al., 2013).

Once home, patients strive to reintegrate into society. Following a stroke, they are usually prohibited from driving for a set period and may be required to take a test determined by driving authorities. Many feel frustrated and unsupported as they struggle to understand the logic behind the ban and assessment process, which can lead to rebellion against medical and legal advice and the continuation of driving. Those who can no longer drive are required to negotiate other methods of transport, which can be difficult due to disabilities (Gallacher et al., 2013).

Following a stroke, patients create a new daily structure to accommodate their disabilities and treatments. They re-learn how to carry out once-familiar tasks, and spend extra time planning activities ahead of time as well as adopting strategies to deal with physical and cognitive disabilities, such as taking periods of rest, learning how to get up from a fall, or creating lists or filing systems. Aphasic patients describe using strategies such as carrying communication cards, repeating words, gesturing, and using drawings or technical devices. Some patients, however, found the use of such strategies either inappropriate for their needs or too laborious to use (Gallacher et al., 2013).

Patients must make decisions about their health care, requiring an appraisal of their treatments, either with the help of healthcare providers, or based on their own judgments. Sometimes decisions are made that deliberately contradict advice given by health professionals. This appears often to be the consequence of a breakdown in communication between patient and health professional, or a lack of understanding on behalf of the patient, although informed patient preference is likely to also play a role (Gallacher et al., 2013).

Patients commonly reflect on their achievements and self-monitor progress to make judgments about their success, comparing their recovery to that of other stroke patients and monitoring for further signs of stroke. Patients describe the need to maintain confidence in their care plan, and one paper described patients keeping up to date with newly available treatments by asking health professionals for information (Gallacher et al., 2013).