Stroke: Emergency Care and RehabilitationPage 8 of 27

Primary prevention refers to the treatment of individuals with no history of stroke. Measures often include use of platelet anti-aggregants, statins, and exercise. The 2011 AHA/ASA guidelines for the primary prevention of stroke emphasize the importance of lifestyle in reducing modifiable risk factors (Goldstein et al., 2011).

Secondary preventive measures are important for people already identified as having had a stroke. For these individuals, lifestyle changes are appropriate; however, there is an increased emphasis on use of medications to manage medical co-morbidities as well as those directed specifically toward stroke.

Guidelines issued in 2014 by the AHA/ASA on the secondary prevention of stroke continue to emphasize nutrition and lifestyle, but include a new section on aortic atherosclerosis (Hughes, 2014). These recommendations include the following:

Despite the advent of new treatments for acute ischemic stroke and the promise of other acute therapies, prevention remains the best approach for reducing the incidence of stroke. Age, gender, race, family history, and medical history (such as a previous stroke) are non-modifiable risk factors for stroke. But those who practice a healthy lifestyle have an 80% lower risk of a first stroke compared with those who do not (JAHA, 2011b).

Once a stroke occurs, rapid diagnosis is essential so that clot-busting drugs or other treatment can be given immediately, because “time is brain.” However, many gaps have been identified in the public knowledge of stroke symptoms. It has long been the goal of the Centers for Disease Control (CDC), in conjunction with the American Heart Association (AHA) and the American Stroke Association (ASA), to increase public awareness of stroke signs and symptoms.

Hypertension remains the most important, well-documented, modifiable risk factor for stroke, and treatment of hypertension is among the most effective strategies for preventing both ischemic and hemorrhagic stroke.

Journal of the American Heart Association, 2011

Approximately 1 in every 6 adults—more than 16% of the U.S. adult population—has high total cholesterol (240 mg/dL and above). People with no additional risk factors, but with high total cholesterol, have approximately twice the risk of heart disease as people with optimal levels (below 200 mg/dL). Lowering saturated fat and increasing fiber in the diet, maintaining a healthy weight, and getting regular physical activity can reduce a person’s risk for cardiovascular disease and stroke by lowering cholesterol levels. In addition to lifestyle changes, statins (eg, lovastatin, simvastatin) may be needed to reduce cholesterol levels (CDC, 2013b).

Heart attacks and strokes are life-and-death emergencies in which every second counts. Nearly half of all stroke and heart attack deaths occur before patients are transported to hospitals. For this reason, prehospital emergency medical service (EMS) organizations and providers are vital partners with public health to reduce death and disability from heart attacks and strokes. Additionally, it is important for the public to recognize the major warning signs and symptoms and the need to immediately call 911(CDC, 2014d).

Cigarette smokers have twice the risk of stroke compared to nonsmokers. Smoking decreases the amount of oxygen in the blood, causing the heart to work harder. Smoking promotes atherosclerosis and increases levels of blood clotting factors (NINDS, 2015).

A healthy diet can reduce the risk for acquiring medical conditions such as hypertension, diabetes, high lipid levels, coronary artery disease, and obesity. All of these conditions increase the chance of having a stroke. Recent studies indicate that a diet rich in fruits and vegetables can lower the risk of heart disease and stroke. Those people who ate more than five servings of fruits and vegetables per day had roughly a 20% lower risk of coronary heart disease and stroke compared with individuals who ate less than three servings per day (Harvard School of Public Health, 2011a).

The average American consumes 3400 mg of sodium each day, most of which comes from processed, store-bought, and restaurant foods. Only about 5% comes from salt added during cooking and about 6% comes from adding salt at the table. Current dietary guidelines recommend that adults should consume no more than 2,300 mg of sodium per day. However, the following population groups should consume no more than 1,500 mg per day:

Two out of three (69%) adults in the United States fall into one or more of these three groups that are at especially high risk for health problems from too much sodium (CDC, 2014e).

Blood pressure rises with increasing amounts of sodium in the diet, and sodium reduction lowers cardiovascular disease and death rates over the long term. Higher salt intake is associated with a 23% increase in stroke and a 14% increase in heart disease (Harvard School of Public Health, 2011b).

Physical activity can help maintain a healthy weight and lower cholesterol and blood pressure. The Surgeon General recommends that adults should engage in moderate-intensity exercise for at least 30 minutes on most days of the week (CDC, 2014f).

Because people who are overweight or obese have an increased risk for cardiovascular disease, diabetes, hypertension, and stroke, weight management can reduce a person’s risk from these factors (CDC, 2014f).

People with diabetes who have already had one heart attack run an even greater risk of having a second one. In addition, heart attacks in people with diabetes are more serious and more likely to result in death. High blood-glucose levels over time can lead to atherosclerosis (NDIC, 2014). If blood-glucose levels are high at the time of a stroke, then brain damage is usually more severe and extensive than when blood glucose is well-controlled. Treating diabetes can delay the onset of complications that increase the risk of stroke (NINDS, 2014b).

The carotid arteries are the main suppliers of blood to the brain. Two recent NINDS trials showed that carotid endarterectomy is a safe and effective stroke prevention therapy for most people with greater than 50% stenosis of the carotid arteries when performed by a qualified and experienced neurosurgeon or vascular surgeon (NINDS, 2015a).

Patients may need a carotid endarterectomy if they have: 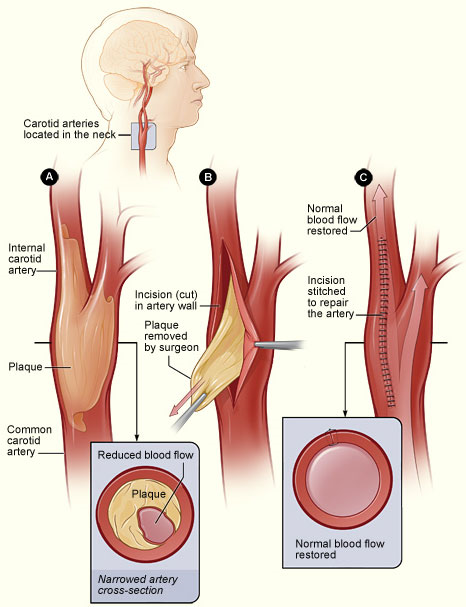 A large clinical trial was done to test the effectiveness of carotid endarterectomy versus carotid stenting. Stenting involves inserting a long, thin catheter into an artery in the leg and threading the catheter through the vascular system into the stenosis of the carotid artery. Once the catheter is in place, the radiologist expands the stent with a balloon on the tip of the catheter to open the stenosis (NINDS, 2015a).

Following up after an average of 2.5 years, there was no difference in the estimated 4-year rates of early stroke and later stroke, heart attack, or death—between carotid artery stenting and carotid endarterectomy. The study also found that the age of the patient made a difference. At age 69 and younger, stenting results were slightly better. Conversely, for patients older than 70, surgical results were slightly superior to stenting (NINDS, 2012).

Carotid endarterectomy is recommended for patients with a non-disabling stroke or transient ischemic attack (TIA) within 6 months and 70% to 99% ipsilateral stenosis when the perioperative rate of major adverse events is <6% (UMHS, 2014).

A carotid endarterectomy can be considered for patients with a non-disabling stroke or TIA within 6 months and 50% to 69% ipsilateral stenosis, based on individual patient factors when the perioperative rate of major adverse events is less than 6% (UMHS, 2014).

Perform carotid endarterectomy as early as judged possible after the stroke or TIA, when risk of another stroke is highest. This benefit of surgery decreases with time (UMHS, 2014).

Carotid stenting is an alternative to carotid endarterectomy when patients are at high risk for surgery or in specific circumstances (e.g., high carotid bifurcation, extensive radiation induced stenosis, prior carotid intervention). The perioperative morbidity and mortality of carotid stenting should be less than 6% (UMHS, 2014).

Other therapies: All patients with carotid disease after stroke should be on optimal medical therapy and have appropriate lifestyle modifications, whether or not an intervention is performed (UMHS, 2014).

In several trials, oral anticoagulation with warfarin was shown to be superior to aspirin plus clopidogrel for prevention of vascular events in patients with AF who were at high risk for stroke. The Atrial fibrillation Clopidogrel Trial with Irbesartan for prevention of Vascular Events (ACTIVE W) was stopped early because of clear evidence of the superiority of anticoagulation as opposed to antiplatelet therapy (Connolly et al., 2006).

The most common identifying feature of stroke is its acute onset. Every second a clot blocks blood flow to the brain, 32,000 brain cells die. Administration of clot-busting thrombolytic drugs must happen as soon as possible after onset of symptoms to prevent further brain damage. A New York study determined that only 20% of patients arrived at a designated stroke center within 3 hours of stroke symptom onset (the recommended time frame for use of thrombolytics). This study showed that more than 70% of respondents would call 911 if they noticed someone having difficulty speaking, but only 33% would call 911 for double vision or trouble seeing (Jurkowski et al., 2008).

The delay between symptom onset and arrival at a hospital is influenced by:

Evidence suggests that most of the delay between symptom onset and hospital arrival occurs before the call to 911 is made (Jurkowski et al., 2008).

The CDC, AHA, and ASA, among others, have developed public health programs that emphasize quick recognition of stroke signs and symptoms.In June 1998 the Brain Attack Coalition, a group of professional, volunteer, and government entities dedicated to reducing stroke-related death and disability, reached consensus on the symptoms of stroke. Previously, standardized definitions for stroke signs and symptoms did not exist (Wall et al., 2008, updated 2013).

The consensus symptoms are:

The “suddens” were adopted by several national and state-based educational campaigns and are used to convey stroke symptoms in clinical and public health settings and among advocacy organizations concerned with stroke.

Although consensus on stroke symptoms has been achieved, public awareness has still lagged behind. For example, advocacy organizations in Massachusetts have annually conducted at least one campaign on the signs and symptoms of stroke. Yet in 2003 only 18% of Massachusetts adults were aware of all signs and symptoms of stroke, but 80% said they would call 911 if they thought someone was having a stroke or heart attack. Because early recognition leads to early treatment and improved clinical outcomes, increasing symptom recognition could vastly improve stroke survival and quality of life (Wall, 2008, updated 2013).

To address the lack of recognition of stroke symptoms in their state, the Massachusetts Department of Public Health Heart Disease and Stroke Prevention and Control Program (HSPC) hired a social marketing and communications company to develop an evidence-based approach to educate the public to recognize the signs of stroke and respond by calling 911. The campaign showed that a public awareness campaign that includes mass media can increase stroke recognition but should target family, coworkers, and caregivers of those at highest risk for stroke. Moreover, educational efforts should focus on behaviors that promote early seeking of hospital care (Wall, 2008, updated 2013).

In another instance, the Cincinnati Prehospital Stroke Scale (CPSS), a three-item scale based on a simplification of the National Institutes of Health Stroke Scale was accurately used by untrained laypeople to identify stroke signs in mock patients and in stroke survivors when prompted by a 911 telecommunicator. The CPSS can identify stroke patients who are candidates for thrombolytic treatment when performed by a physician and has similar results when used by prehospital care providers (Wall, 2008, updated 2013).

The CPSS was modified with the addition of a fourth item, so that it could be used by lay people before they called 911. These and other studies lead to the development of the Stroke Heroes Act FAST campaign which, in a retrospective chart review of 3500 stroke patients, successfully identified almost 90% of patients with stroke or transient ischemic attack (Wall, 2008, updated 2013).

Checking for Signs of Stroke 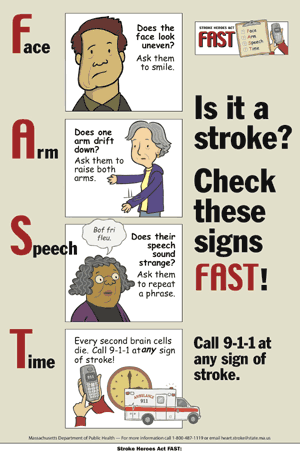 F: Does the face look uneven?

A: Does the arm drift down?

S: Does the speech sound strange?

T: Every second brain cells die. Call 911 at any sign of stroke.