Stroke: Emergency Care and RehabilitationPage 25 of 27

It is well-known that standard treatments available today are limited in their ability to help stroke patients attain full functional recovery. To address this, research into novel treatment strategies is ongoing. One such area of research is regenerative medicine, the aim of which is to restore or repair damaged brain tissue. Other novel treatment strategies include dopamine augmented rehabilitation, noninvasive brain stimulation, and neurorehabilitation training.

The aim of neuroregenerative medicine is to restore or repair brain tissue damaged following a stroke. One area of study involves the use of various types of stem cells to regenerate damaged neural tissue following an ischemic stroke. A number of stem cells types, including embryonic stem cells, induced pluripotent stem cells, and neural stem cells have been utilized in cell therapy in an attempt to repair injured brain tissue. One of the major problems associated with this approach is poor cell survival. To address this problem, researchers are employing tissue engineering techniques to build “scaffolds” as carriers for cells. It is thought that the use of specialized scaffolds will improve cell survival both in vitro and in vivo (Wang et al., 2014).

The emerging evidence from pilot studies indicates that the addition of certain drugs with physical and occupational therapy may improve the recovery of arm and leg movements as well as recovery of essential day-to-day activities such as walking and dressing. Studies suggest that the nerve circuits in the brain respond better to therapy when they are also exposed to drugs such as dopamine at the same time as having occupational or physical therapy. These improvements are in addition to the benefits gained from physical and occupational therapy alone (Bhakta et al., 2014).

The impact of dopamine on motor function in stroke has been investigated in small-scale clinical studies. A randomized controlled trial reported the effect of L-dopa on motor function in 53 people who were 3 weeks to 6 months post stroke. All patients received daily physical therapy sessions lasting 30 minutes for 3 weeks in a hospital setting. Motor function was assessed using the Rivermead Mobility Index (RMI). Significantly greater improvement in RMI scores and walking ability were reported in the L-dopa treated group compared with placebo. The drug was well tolerated and no serious drug-related adverse events were reported. The effect on function was still present three weeks after cessation of L-dopa (Bhakta et al., 2014).

Electrical currents or magnetic fields can modify the functional activity of the brain, and in the last decade this approach, known as noninvasive brain stimulation (NIBS), has rapidly gathered a worldwide interest as a therapeutic tool. This typically involves two techniques: repetitive transcranial magnetic stimulation and transcranial direct current stimulation (Iosa et al., 2012).

In a recent study at the Rehabilitation Institute of Chicago, researchers used a combination of transcranial magnetic stimulation and task-oriented occupational therapy to try to improve upper extremity function following a stroke. Treatment was 3 times per week for 6 weeks with followup at 1 week, 1 month, and 6 months. Participants showed significant improvement on the UEFM* scale, with lasting improvements in motor function (RIC, 2014).

*UEFM: Upper extremity Fugl-Meyer Scale is used to measure upper extremity impairment after a stroke. It has four parts (shoulder-arm, wrist, hand, and coordination) containing 33 tasks scored on a scale of 0 to 2, with a maximum score of 66. Movements are first performed on the less affected side, followed by the more affected upper extremity. Higher scores indicate better movement abilities.

Motor cortex excitability enhancement appears to be required for motor learning. In fact, pairing of rehabilitative training with noninvasive brain stimulation results in more enduring performance improvements and functional plasticity in the affected hemisphere compared with motor training or stimulation alone in patients with chronic stroke. Furthermore, cumulative noninvasive brain stimulation has been shown to be important for continuous motor improvement in patients with stroke (Takeuchi & Izumi, 2013).

To provide patients with effective, uncomplicated, and inexpensive rehabilitation in their homes, researchers at the Madeira Interactive Technologies Institute in Portugal have developed the Neurorehabilitation Training Toolkit (NTT), a PC-based interactive system for upper-limb rehabilitation. The NTT makes use of well-established state-of-the-art requirements for effective rehabilitation after stroke, providing training that is frequent, reiterative, and task specific, and that presents feedback on performance and outcomes. These characteristics are achieved through the use of game-like tasks displayed on a standard computer, designed to address the specific upper-limb deficits of stroke patients (Bermúdez et al., 2012).

Assisted Rehabilitation in the Home 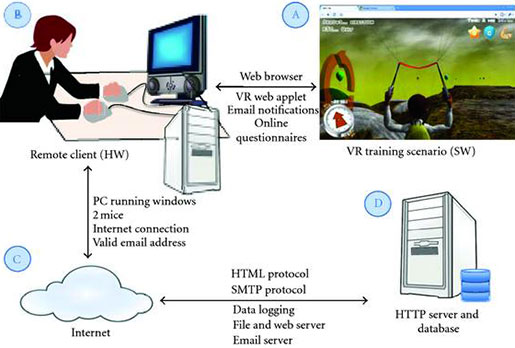 Neurorehabilitation Training Toolkit system architecture. (A) A web browser is used to access the application and its instruction at http://neurorehabilitation.m-iti.org/NTT/ (B) NTT can be executed on any modern PC equipped with two mice and an internet connection. (C) The NTT software is accessed freely from Internet, where the NTT servers are located. (D) A number of remote servers host the NTT site, the application itself, and are used to log user data. Source: Bermúdez et al., 2012).

The NTT training task requires patients to be able to read, and not to have major cognitive deficits, seizures, sensory aphasias, or other perceptual problems that could impede the understanding of the task. The training consists of a bilateral task that requires practicing range of motion and movement coordination (Bermúdez et al., 2012).