Stroke: Emergency Care and RehabilitationPage 16 of 27

Dysphagia, or difficulty eating and swallowing, is a major complication following both hemispheric and brainstem stroke. Dysphagia has been associated with higher rates of respiratory complications and increased risk of aspiration pneumonia, dehydration, and nutritional compromise. Dysphagia has also been associated with poorer outcomes in stroke and increased likelihood of residential placement (Langdon & Blacker, 2010).

Screening for dysphagia is an important aspect of care in the acute phase of a stroke, regardless of stroke severity. There is good evidence that the presence of dysphagia following a stroke is associated with poor clinical outcomes including higher mortality, disability, chest infection, and longer hospital stay (RCP, 2012). Screening should be completed by nursing soon after admission, before the patient is given any food or fluids. Anyone showing signs of dysphagia should receive a formal swallowing evaluation by a speech-language pathologist as soon as is feasible.

In a review of swallowing assessment methods, the bedside swallow assessment was the most frequently used method (RCSLT, 2014). If a more thorough assessment is needed, videofluoroscopy (a type of x-ray) is commonly used. Another assessment tool, fiber-optic endoscopic evaluation of swallowing (FEES) has improved accuracy for the detection of dysphagia, aspiration, and its underlying causes. It is also used to evaluate methods of management by examining the impact of different head positions and dietary substances and the impact of these on improving swallowing (RCSLT, 2014).

In recent years, cervical auscultation has been adopted for the bedside/clinical assessment of dysphagia. Cervical auscultation is the use of a listening device, typically a stethoscope, to assess the sounds associated with swallowing. Listeners interpret the sounds and make inferences about the efficiency of the swallow or cause of the impairment. There is no agreement on the origin and implication of the sounds heard when using this technique to assess swallowing and the reliability of raters using this technique has been found to be poor (RCSLT, 2014).

Pulse oximetry has also been suggested as an alternative to monitoring swallowing and detecting aspiration. Pulse oximetry is well tolerated, requires little patient co-operation, and is an inexpensive option to other instrumental assessments such as videofluoroscopy. Using pulse oximetry to detect aspiration is based on the principle that reduced and oxygenated hemoglobin exhibits different absorption characteristics to red and infrared light emitted from a finger or ear probe. Pulse oximetry measures the frequency and severity of oxygen desaturation of arterial blood, which is recognized as a possible marker of aspiration. Although pulse oximetry is a quick and non-invasive method to detect aspiration following stroke, its association with oxygen desaturation has been inconclusive (RCSLT, 2014).

Swallowing is a complex process. Some fifty pairs of muscles and many nerves work to receive food into the mouth, prepare it, and move it from the mouth to the stomach. This happens in three stages. During the first stage, called the oral phase, the tongue collects the food or liquid, making it ready for swallowing. The tongue and jaw move solid food around in the mouth so it can be chewed. Chewing makes solid food the right size and texture to swallow by mixing the food with saliva. Saliva softens and moistens the food to make swallowing easier. Normally, the only solid we swallow without chewing is in the form of a pill or caplet. Everything else that we swallow is in the form of a liquid, a puree, or a chewed solid (NIDCD, 2014). 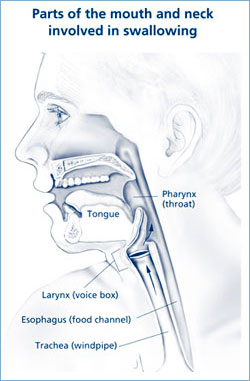 The second stage begins when the tongue pushes the food or liquid to the back of the mouth. This triggers a swallowing response that passes the food through the pharynx, or throat (see figure at right). During this phase, called the pharyngeal phase, the larynx (voice box) closes tightly and breathing stops to prevent food or liquid from entering the airway and lungs (NIDCD, 2014).

The third stage begins when food or liquid enters the esophagus, the tube that carries food and liquid to the stomach. The passage through the esophagus, called the esophageal phase, usually occurs in about three seconds, depending on the texture or consistency of the food, but can take slightly longer in some cases, such as when swallowing a pill (NIDCD, 2014).

The first critical point in nutritional control for patients with dysphagia is to prevent aspiration. Although thickener is generally applied to liquid boluses to prevent early inflow into the pharynx and larynx, increased bolus viscosity may decrease the bolus transit speed, potentially increasing the risk of pharyngeal residue. As for solid boluses, swallowing without sufficient mastication can again lead to residue and an increased risk of aspiration (Yokoyama et al., 2014).

A number of techniques and interventions have been reviewed for their efficacy in treating swallowing disorders. One such treatment—tongue pressure resistance training—has emerged as an innovative treatment for dysphagia. Studies by JoAnne Robbins, a professor at the University of Wisconsin School of Medicine and Public Health, have shown that 8 weeks of intensive tongue pressure resistance training improved tongue strength in healthy seniors and those with both chronic and acute dysphagia following stroke (Steele et al., 2013).

In these studies, Robbins had the participants complete an 8-week tongue-strengthening training protocol with an Iowa oral performance instrument (IOPI). Her findings included significantly improved isometric tongue pressures and swallowing pressures in all of the three populations that she studied (healthy participants, acute dysphagia, and chronic dysphagia). Although significant gains were made in airway protection, as judged by reduced scores on the penetration-aspiration scale, it is of ongoing concern that people with dysphagia after a stroke often have difficulty controlling the flow of thin liquids. Early arrival of a liquid bolus in the pharynx, secondary to poor oral control, represents a risk of penetration-aspiration (entry of material into the airway) (Steele et al., 2013).

Another promising approach to the treatment of dysphagia is neuromuscular electrical stimulation of the swallowing muscles. Electrical stimulation has two general purposes: to cause muscle contractions and to stimulate the sensory pathways. In the first approach, the intensity of electrical current is increased until the muscle contraction occurs. Strengthening of the swallowing muscles may improve airway protection and increase the width of the upper esophageal sphincter opening (Poorjavad et al., 2014).

In the sensory approach, the sensory threshold is usually identified as the lowest current level at which the patient feels a tingling sensation on his or her neck skin. Considering the sensory stimulation effects on the long-term reorganization of the human cortex, some researchers use sensory electrical stimulation to improve swallowing function (Poorjavad et al., 2014).