Stroke: Emergency Care and RehabilitationPage 3 of 27

On average, one American dies from stroke every 4 minutes. Every year, more than 795,000 people in the United States have a stroke. About 610,000 of these are first or new strokes. About 185,000 strokes—nearly 1 of 4—are in people who have had a previous stroke. About 87% of all strokes are ischemic strokes, when blood flow to the brain is blocked. Stroke is a leading cause of serious long-term disability (Go et al., 2014).

In recent years, stroke has declined from the third to fourth leading cause of death in the United States (Go et al., 2014). This change is largely the result of decades of interventions focusing on hypertension, as well as aggressive public campaigns emphasizing early recognition and treatment of stroke symptoms. Despite the progress made in reducing stroke-related deaths, the burden of disability from stroke remains high and continues to be the leading cause of disability in the United States, contributing to poor quality of life and adding billions of dollars to the cost of healthcare (Go et al., 2014).

Stroke is the fourth leading cause of death for Americans, but the risk of having a stroke varies with race and ethnicity. Risk of having a first stroke is nearly twice as high for blacks than for whites, and blacks are more likely to die following a stroke than are whites. Hispanics’ risk for stroke falls between that of whites and blacks. American Indians, Alaska Natives, and blacks are more likely to have had a stroke than are other groups (CDC, 2014a). 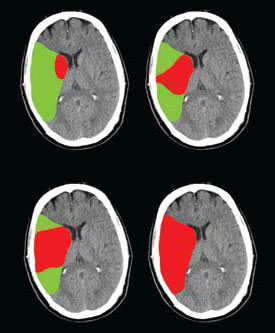 Immediately after an ischemic stroke (top left), a core of irreversibly damaged brain tissue (red) is surrounded by an area of viable but at-risk tissue called the penumbra (green). Unless blood flow is restored quickly, the tissue within the penumbra will be lost (bottom right). Source: NIH (n.d.).

In the United States, African Americans have an age-adjusted risk of death from stroke that is about 1.5 times that of white residents. Hispanics have a lower overall incidence of stroke than whites or blacks, but are more likely to experience stroke at a younger age. Men are at greater risk for stroke than females, with an incidence of about 63 per 100,000 for men and 59 per 100,000 for women. However, females have a higher death rate of 39.3% compared to 26.3% for males (Towfighi & Saver, 2011).

Although stroke is considered a disease of elders, one-third of strokes occur in individuals younger than 65 years. About 15% to 30% of those suffering an ischemic stroke will die within the first month. The chance of surviving a hemorrhagic stroke is more dire, with a survival rate of only about 20% (Slater, 2014).

After an acute episode, the most common causes of death are pulmonary embolism (within 2–4 weeks), pneumonia (within 2–3 months), and cardiac disease (>3 months) (Slater, 2014).