Medicine and drug use is highly regulated by the federal government and the states to protect people from harm. Regulations require pharmaceutical companies to place warnings on packaging of OTC and prescribed medicines. Federal and state regulations control who is able to prescribe medicines with a high risk for abuse. Medical training institutions teach students to prescribe controlled substances and OTC medicines safely. Schools of pharmacy teach pharmacists to dispense medicines safely. Pharmaceutical boards regulate the practice of dispensing medicines (OHA, 2014).

The increase in nonmedical use of pharmaceuticals suggests that previous prevention measures—such as provider and patient education and restrictions on the use of specific formulations—have not been adequate to curb widespread abuse and misuse. Given the societal burden of the problem, additional interventions are needed, such as more systematic provider education, universal use of state prescription drug monitoring programs by providers, routine monitoring of insurance claims information for signs of inappropriate use, and efforts by providers and insurers to intervene when patients use drugs inappropriately (MMWR, 2010).

Diversion is the use of drugs for other than medically necessary or legal purposes or for nonmedical or not-medically-authorized purposes. Diversion involves, but is not limited to, physicians who sell prescriptions to drug dealers or abusers, pharmacists who falsify records and subsequently sell the drugs, employees who steal from inventory and falsify orders to cover illicit sales, prescription forgers, and individuals who commit armed robbery of pharmacies and drug distributors (DEA, n.d.).

Surveys reveal that diversion of prescription drugs is endemic in communities. Diversion takes place in many contexts, most often when friends and relatives share their prescription pain relievers. Fifty-four percent of those surveyed in the United States reported the source of the pain relievers that they used nonmedically was free from their family and friends (OHA, 2014).

Under federal law, all businesses that import, export, manufacture, or distribute controlled substances; all health professionals licensed to dispense, administer, or prescribe them; and all pharmacies authorized to fill prescriptions must register with the DEA. Registrants must comply with regulatory requirements relating to drug security and recordkeeping. The DEA is obligated under international treaties to monitor the movement of licit controlled substances across U.S. borders and to issue import and export permits for that movement (DEA, n.d.). 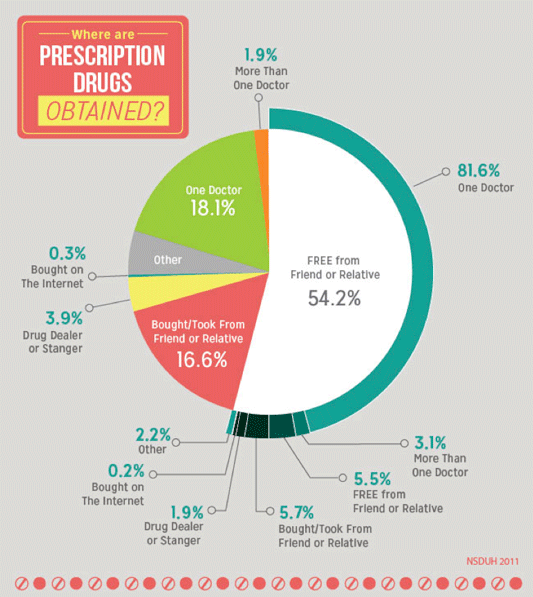 More than half of prescription drugs are obtained from a friend or relative. Source: NIDA, 2014

In addition to other drugs of abuse, today’s illicit drug market offers an assortment of purely synthetic drugs, sometimes referred to as designer drugs. The term designer drugs in the context of drug abuse refers to substances chemically similar to and/or that mimic the drug-like effects of controlled substances. The term is often used synonymously with club drugs, party drugs, and synthetic drugs. Designer drugs affect the central nervous system and can display stimulant, depressant, and hallucinogenic properties (Volkow, 2013).

A large number of new unregulated substances are being abused for their psychoactive properties, often resulting in violent and unpredictable behavior. This growing phenomenon is particularly challenging, first because of the speed with which rogue chemists can modify existing drugs and market them. and second because of the ease with which the Internet allows for the sharing of information about and purchase of products such as “spice” and “bath salts” (Volkow, 2013).

Thirty-six states have Prescription Drug Monitoring Programs (PDMP) that can help prescribers and pharmacists identify high-risk patients who would benefit from early interventions. CDC recommends that PDMPs focus their resources on high-risk patients and prescribers who clearly deviate from accepted medical practice in terms of prescription painkiller dosage, numbers of prescriptions for controlled substances, and proportion of doctor shoppers among their patients. CDC also recommends that PDMPs link to electronic health records systems so that PDMP information is better integrated into healthcare providers’ day-to-day practices (CDC, 2016b).

New research funded by the National Institute on Drug Abuse (NIDA) found that state implementation of PDMPs was associated with a reduction in opioid-related overdose deaths. The study also found PDMPs that monitored a greater numbers of drugs with abuse potential and updated their data more frequently had greater declines in opioid-related overdose deaths than programs without those characteristics (NIDA, 2016b).

Implementation of a PDMP was linked to a decrease of 1.12 opioid-related overdose deaths per 100,000 population. A state with a program that monitored four or more drug schedules and updated their information at least weekly was predicted to have 1.55 fewer opioid-related overdose deaths per 100,000 population annually than a state without a program (NIDA, 2016b).

For many years, community-based programs have offered opioid overdose prevention services to laypeople who might witness an overdose, including people who use drugs, their families and friends, and service providers. Since 1996, an increasing number of programs provide laypeople with training and kits containing the opioid antagonist naloxone hydrochloride (naloxone) to reverse the potentially fatal respiratory depression caused by heroin and other opioids (Wheeler et al., 2015).

Providing naloxone kits to laypeople reduces overdose deaths, is safe, and is cost-effective. U.S. and international health organizations recommend providing naloxone kits to laypeople who might witness an opioid overdose; to patients in substance use treatment programs; to people leaving prison and jail; and as a component of responsible opioid prescribing (Wheeler et al., 2015).

Although the number of organizations providing naloxone kits to laypeople is increasing, in 2013, 20 states had no such organization, and 9 had less than 1 layperson per 100,000 population who had received a naloxone kit. Among these 29 states with minimal or no access to naloxone kits for laypeople, 11 had age-adjusted 2013 drug overdose death rates higher than the national median (Wheeler et al., 2015).

At their annual meeting in June 2016, the AMA adopted new policies that encourage physicians to co-prescribe naloxone to patients at risk of an overdose; promote timely and appropriate access to non-opioid and nonpharmacologic treatments for pain; and support efforts to delink payments to healthcare facilities with patient satisfaction scores relating to the evaluation and management of pain (AMA, 2016a).

The new naloxone policies will promote increased access to the overdose-reversing drug for friends and family members of patients at risk of overdose. The policy also encourages private and public payers to include all forms of naloxone on their preferred drug lists and formularies with nominal or no cost sharing. The policy supports liability protections for physicians and other authorized healthcare professionals to prescribe, dispense, and administer naloxone. Delegates called for policies to enable law enforcement agencies to carry and administer naloxone, as many states have done (AMA, 2016a).

Medications like buprenorphine and methadone have revolutionized the treatment of people with opioid use disorder, including those with severe disorders (addiction). By controlling cravings and withdrawal symptoms without producing a high, these medications enable the patient to engage in treatment and make healthier choices while balance is gradually restored in brain circuits involved in reward and self-control. In people with severe disorders, these circuits are greatly disrupted (NIDA, 2016c).

One of the challenges with all addiction medications, however, is making sure patients adhere to their prescribed regimen. For the medication to be effective, the patient must take their prescription or show up daily at the clinic. This can be challenging for anyone managing life’s responsibilities, especially in times of stress. Failing at this challenge can mean relapse, which may delay recovery (NIDA, 2016c).

In May of 2016, the FDA approved a long-acting buprenorphine implant called Probuphine. This subdermal implant delivers a constant low dose of buprenorphine over six months, the first such tool in the treatment of opioid use disorder. The implant is approved for individuals with opioid dependence who have already been treated with, and are medically stable on, existing orally absorbed buprenorphine formulations. It is a valuable new therapeutic tool for this subset of patients (NIDA, 2016c).

All on the Same Team: Managing Chronic Pain [9:03]

Patients on opioids and providers work to improve their quality of life. Oregon Pain Guidance (2016).
https://www.youtube.com/watch?v=2kP10Z228Os&feature=youtu.be