Stroke: Emergency Care and RehabilitationPage 5 of 27

The Anatomy of the Brain

The cerebrum is made up of the parietal, frontal, occipital, and temporal lobes. Source: 3Dscience.com. Used with permission.

The brain is made up of the cerebrum, cerebellum, and the brainstem. The cerebrum has two hemispheres, each divided into four lobes: the frontal, parietal, temporal, and occipital lobes. The lobes are named for the bones of the skull overlying them. Each lobe has extensive interaction with other lobes, although specific lobes have regions that are responsible for certain cognitive functions. The nerve cells within each region are highly interconnected with other neurons in the same region, to related areas in other lobes, to areas deep in the cerebrum, and to the brainstem and spinal cord.

The cerebral cortex is a thin layer of nerve cell bodies covering the surface of each hemisphere. It is the part of the brain most often affected by stroke. Axons arising from the estimated 100 billion cell bodies of the cortex run both horizontally and vertically, and each connects with thousands of other neurons, creating a highly complex network.

The cerebral cortex is highly convoluted and folded, which increases its surface—a phenomenon unique to humans. The cell bodies of the cortex have a high metabolic requirement, using six times more blood than other parts of the brain. The interconnectedness of the nerve cells creates a flexible system, with redundancy that allows recovery of function following injury to the brain.

The cerebral cortex has historically been divided by function and structure areas into the somatosensory, somatomotor, primary motor, visual, and auditory areas. These descriptions derive from early brain research and are no longer considered to be accurate except as a broad overview. New imaging techniques show that the cortex is more extensively interconnected than previously thought.

The cerebral cortex is the thinking and processing part of the brain. The cortex originates thoughts and commands and receives information from the periphery and other parts of the brain for processing and interpretation. Motor commands flow from efferent nerve fibers originating in the cortex out to the muscles.

Sensory information flows via bundles of afferent nerves residing in the cortex from the peripheral nervous system for processing. The cerebral cortex—especially the frontal areas—is the area of the brain most commonly damaged by stroke. 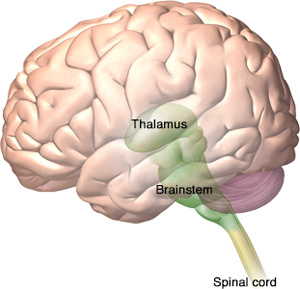 The thalamus is the destination of spinothalamic tract—the sensory pathway responsible for processing pain, temperature, and crude touch. Source: 3Dscience.com. Used with permission.

The thalamus or “inner chamber” is a small ovoid mass about 3 cm long located at the base of the cerebral hemispheres. Sensation travels to the thalamus from peripheral sensory neurons. The thalamus is closely integrated with the cerebral cortex and is responsible for the initial processing of all sensory information (except olfaction).

The thalamus accepts and sifts sensory information and is the part of the brain where sensation is first consciously experienced or felt.

The subcortical structures—the basal ganglia, also known as the extrapyramidal system—are three large masses of cells (ganglia) that lie at the base of the cerebral cortex and surround the thalamus. The three masses that compose the basal ganglia are called the caudate nucleus, the putamen, and the globus pallidus. The names of these three structures are combined in various ways: the caudate nucleus and the putamen together are referred to as the striatum and the globus pallidus and the putamen together are known as the lentiform nucleus. 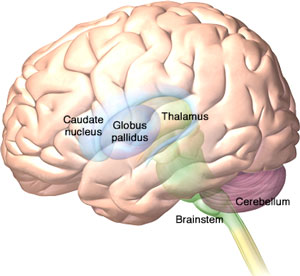 This image illustrates the left lateral view of the brain and spinal cord, as well as the caudate nucleus and basal ganglia deep in the brain, and a contour of the rest of the thalamus. The cerebral hemisphere (in pink) surrounds the caudate nucleus thalamus (in the center). Source: 3Dscience.com. Used with permission.

The basal ganglia, together with the cerebellum and the motor cortex, are involved with motor control. A motor command initiated by the cortex is modified and processed within the basal ganglia. This part of the brain helps the cerebral cortex execute subconscious, learned movements. It scales movement and determines how large, small, fast, or slow a movement needs to be for optimum performance. The basal ganglia also work in conjunction with the substantia nigra as part of the dopamine circuit, which is damaged in Parkinson’s disease.

The Brainstem and Cerebellum

The brainstem is located above the spinal cord and beneath the thalamus and consists of the medulla oblongata, the pons, and the midbrain. The brainstem contains well-defined clusters of nerve cell bodies or nuclei that receive sensory input from the cranial nerves and send this information upstream to the thalamus for further processing. The brainstem has an ill-defined central core called the brainstem reticular formation that houses the respiratory and cardiovascular centers that influence breathing, respiration, blood pressure, circulation, and vasomotor tone.

Medial View of the Brain

The cerebellum works with other motor control areas of the brain to control and coordinate movement. Specifically, the cerebellum corrects deviations in movement by comparing one movement with another and fine-tuning subsequent movements. The cerebellum is primarily responsible for the rapid adjustments needed for normal motor activity. It also sends information to and receives information from the vestibular system and helps to control balance by controlling the axial muscles of the body.