10. Activities for People with Dementia

Engaging people in regular cognitive, physical, and social activities is a promising dementia prevention strategy. This requires activity programs that combine the most beneficial dementia prevention activities, are acceptable to people, and result in long-term activity participation and lifestyle change (Dannhauser et al., 2014).

Regular participation in specific physical, cognitive, and socially stimulating leisure activities during mid-life reduces the risk of dementia in later life by 28% to 47% (Dannhauser et al., 2014). This activity-associated risk reduction is probably due to the positive effects that specific activities have on modifiable dementia risk factors such as physical and cognitive inactivity, obesity, hypertension, and diabetes (Dannhauser et al., 2014).

A number of studies have suggested that carefully designed activities can also have a positive effect on depression, confusion, and challenging behaviors.

Cognitive rehabilitation was originally developed through work with younger brain-injured people, although it is easily applied to people with dementia. Cognitive therapists help individuals and their families identify goals and strategies aimed at improving cognitive function. Interventions address difficulties considered most relevant by people with dementia and their families (Bahar-Fuchs et al., 2013).

Several types of cognition-based interventions have been described. These interventions typically involve a range of general activities and discussions, can be conducted one-on-one or in groups, and are aimed at general enhancement of cognitive and social functioning. A recent Cochrane Review concluded that general cognitive stimulation and reality orientation consistently produced improvements in general cognition and, in some cases, in self-reported quality of life and well-being, primarily for people with mild to moderate dementia (Bahar-Fuchs et al., 2013).

Cognitive training can involve guided practice on a set of standardized tasks designed to reflect particular cognitive functions, such as memory, attention, or problem solving. Tasks may be paper-and-pencil or computerized, or can focus on ADLs. The ability to adjust the level of difficulty in response to performance is one of the strengths of computerized programs (Bahar-Fuchs et al., 2013).

Cognitive training can be offered through individual or group sessions or facilitated by family members with therapist support. There is some evidence that cognitive training may enhance the effects of pharmacologic therapy and some studies have evaluated cognitive training in combination with acetylcholinesterase-inhibitors or other medications (Bahar-Fuchs et al., 2013).

Reduced social participation, especially in older adults, may be related to the loss of social identity that a person previously derived from their profession, job, or membership in a group. There is evidence for a strong link between social identity and utilization of healthcare; for example, healthcare is more readily accepted when receivers share their social identity with the provider, and lack of shared social identity may lead to service refusal.

This suggests that an older man may not wish to attend a group populated mainly by women because this would challenge his male identity. Alternately, older people who identify as care providers may not want to attend a support group for fear they would become a care recipient. Moreover, widespread ageism may lead individuals to avoid groups of older people lest they become identified as “old,” and thus be stigmatized (Goll et al., 2015).

Lonely older adults may avoid social participation out of fear of rejection or exploitation by their peers. Social fears have been linked to loneliness and social isolation in working-age adults and in lonely older people. Loneliness can reflect a lack of perceived safety in social situations, which leads to cognitive and behavioral patterns that reinforce loneliness (Goll et al., 2015).

Talking therapies that target maladaptive behaviors and cognitions, like Cognitive Behavioral Therapy (CBT), might enhance late-life social participation. However, since lonely and socially fearful older people are unlikely to engage in therapy without significant support, a more effective strategy might add CBT principles into pre-existing community groups. For example, organizations might challenge fears about attendance by emphasizing the friendliness of groups, implementing a “buddy” system for new members, normalizing social fears, and facilitating gradual steps towards participation. Organizations can implement these practices in consultation with a mental health professional such as a clinical psychologist (Goll et al., 2015).

Lonely older adults avoid social opportunities for fear of invalidating their preferred identities. In one study, participants sought to uphold independent and youthful identities. They frequently emphasized their self-sufficiency, distinguished themselves from “old” people whom they described as dependent and decrepit, and avoided opportunities for support in case this marked them as old and dependent. Participants emphasized their preferred social identities (eg, caregiver, Christian, educated person, sports fan). They avoided social situations that might contradict their preferred identities, and wished for (but could not find) opportunities that might provide identity reinforcement (Goll et al., 2015).

Society commonly associates youthfulness with valued traits such as independence, economic productivity, and usefulness, and aging with intensely negative characteristics such as dependency and uselessness. Efforts to maintain youthfulness and independence can be viewed as attempts to preserve valued identities. Attempts to maintain pre-existing social identities, which often involved being productive in some way, are important to older adults (Goll et al., 2015).

While memory problems are the most characteristic symptom of Alzheimer’s disease, most individuals with dementia also experience progressive problems with communication. The deterioration of the individual’s ability to communicate contributes considerably to the stress and burden of caregivers and is often classified among the most serious stressors that caregivers face. Poor communication between the caregiver and the care recipient can lead to conflicts, isolation, or depression in one or both of these individuals and may lead to earlier placement in institutions. Practices to enhance the verbal communication of individuals with Alzheimer’s disease can help with these problems. Various methods have been proposed to improve caregiver–patient communication; these include memory aids, education and training of caregivers, and activity programs (Egan et al., 2010).

Photos Used as a Memory Device 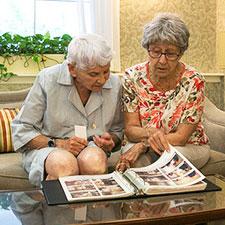 Photos of family members can be used to encourage memories. Source: National Institute on Aging.

Memory aids provide language support in the form of sentences, words, and images, and access to other semantic information stored in long-term memory. Written support can compensate for certain comprehension deficits that may appear when instructions are provided verbally. By offering visual cues, memory aids can also serve to remind individuals of the current task or topic of conversation, enabling better participation in the conversation. Cues also limit the number of choices and provide concrete topics for conversation. Socially, memory aids support the desire to communicate, another aspect of communication that often remains intact in individuals with dementia (Egan et al., 2010).

Memory aids generally consist of biographical information, photos of family members, and descriptions of important events in the life of the individual. By using images and phrases that are brief and simple, memory aids encourage patients’ automatic communication abilities, with the goal of improving the structure and quality of communication with others (Egan et al., 2010).

Caregiver education and training is another method used to improve communication between caregivers and care recipients. Recommended strategies include using close-ended or choice-based questions rather than open-ended ones, using direct and simple phrases, repeating key words and ideas in the conversation, noting a change in the topic of conversation, using direct contact, as well as using comments and nonverbal cues to preserve the quality and flow of the conversation (Egan et al., 2010).

Activity-based approaches can also increase communication. These interventions may be carried out individually or in groups and use very specific (eg, preparing a meal) or diverse activities to stimulate communication. Generally, the focus of these groups is on improving or maintaining functional skills, including communication (Egan et al., 2010).

One method for improving communication between caregivers and care recipients is validation therapy. Naomi Feil developed validation therapy through her work with patients she described as severely disoriented. Her work over the years has led to the increasing use of validation in dementia care as a way of demonstrating to the patient that their feelings, thoughts, and opinions are acknowledged and respected by the caregiver. A combination of validation and reminiscence is often useful in helping confused patients experience the joy of earlier life experiences and contributes to their quality of life (Zeman, 2015). A wonderful and effective demonstration of Feil’s work can be viewed in the following video.