Viruses are constantly changing, and this includes SARS-CoV-2, the virus that causes COVID-19. These genetic mutations occur over time and can lead to the emergence of new variants that may have different characteristics than the original virus.

If you think about a virus like a tree growing and branching out; each branch on the tree is slightly different than the others. By comparing the branches, scientists can label them according to the differences. These small differences, or variants, have been studied and identified since the beginning of the pandemic. Multiple variants of the virus that causes COVID-19 have been documented in the U.S. and globally during this pandemic. Sometimes new variants emerge and disappear. Other times, variants emerge and persist.

Although most mutations have little to no effect, in a large population of infected people—as in the current pandemic—some mutations give the virus an evolutionary edge, one that benefits its spread.

Mutations in the COVID-19 virus:

Mutations are changes in the genetic code of a virus that naturally occur over time when a virus makes copies of itself in an infected animal or person. These changes continue to occur as long as the virus spreads through populations. “What we are going to see is a cat-and-mouse game between the virus changing and the vaccine manufacturers having to quickly change their vaccines,” said Devi Sridhar, professor of global public health at the University of Edinburgh (NBC News, 2021).

The terms variant and strain are often used interchangeably, but they have different meanings. If a coronavirus specimen contains one or more mutations that another specimen lacks, but there is no detectable functional difference, it is called a variant. Many mutations do not affect the virus’s ability to spread or cause disease because they do not alter the major proteins involved in infection. However, eventually these are outmatched by variants with mutations that are more beneficial for the virus (CDC, 2021, April 2). If the mutations in a particular variant make the virus “demonstrably different”—more lethal, more able to evade a vaccine or easier to transmit—then it is a distinct strain (Kaplan, 2021).

The SARS-CoV-2 genome encodes instructions organized into sections, called genes, to build the virus. A process called genomic sequencing is used to decode the genes and learn more about the virus. Genomic sequencing allows scientists to identify SARS-CoV-2 and monitor how it changes over time into new variants, understand how these changes affect the characteristics of the virus, and use this information to predict how it might impact health (CDC, 2021, April 2).

Some potential consequences of emerging variants are the following (CDC, 2021, January 28):

Among these possibilities, the last—the ability to evade vaccine-induced immunity—is the most concerning. Once a large proportion of the population is vaccinated, there will be immune pressure to favor and accelerate emergence of “escape mutants” with the ability to avoid vaccine antibodies. There is no evidence that this is occurring, and most experts believe escape mutants are unlikely to emerge because of the nature of the virus (CDC, 2021, January 28).

The most concerning consequence of emerging variants is:

Coronaviruses are named for the crown-like spikes on their surfaces. Changes in the virus, including changes to its spikes, can affect how it spreads and what happens to people who are infected with it (CDC, 2021, December 13).

Multiple variants of the virus that causes COVID-19 are circulating globally. Currently, The B.1.1.7 (Alpha), B.1.351 (Beta), B.1.617.2 (Delta), and P.1 (Gamma), and Omicron variants circulating in the U.S. Delta and Omicron are currently classified as variants of concern. 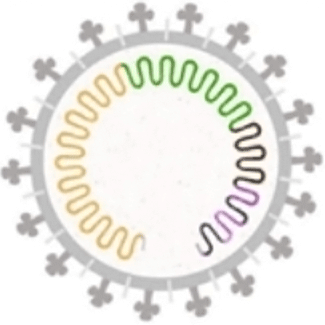 The virus genome is packed inside an envelope that contains proteins, including the spike protein. Source: CDC.

Variants Can Be Minimized

“Viruses are constantly mutating—or making “typos” in their genetic code—as they spread and make copies of themselves” (AP, 2021). Most of the mutations are not concerning and some may even weaken a virus; however, some mutations make a virus more contagious, deadlier, and/or able to get around vaccine antibodies. Genetic sequencing is used to identify the worrisome variants that may need new treatments and vaccines.

As long as this virus continues to spread, there will be mutations, new variants and strains. Limiting the spread of COVID-19 through measures such as social distancing, mask wearing, and vaccinations gives it less opportunity to mutate and gives us time to get ahead of the virus.
Back Next