To get to herd immunity, Americans would probably have to endure a scale of death and loss many times greater than they have already suffered.

Nearly 3 million people would die on a path to “natural” herd immunity, and many thousands of additional infections and deaths would be expected even after herd immunity is reached.

Epidemiologists define the herd immunity threshold for a given virus as the percentage of the population that must be immune to ensure that its introduction will not cause an outbreak. If enough people are immune, an infected person will likely come into contact only with people who are already immune rather than spreading the virus to someone who is susceptible.

Herd immunity is usually discussed in the context of vaccination. For example, if 90% of the population (the herd) has received a chickenpox vaccine, the remaining 10% (often including people who cannot become vaccinated, like babies and the immunocompromised) will be protected from the introduction of a single person with chickenpox.

Herd immunity, also called community immunity, occurs when enough people in a population are vaccinated against a disease, or have antibodies from surviving the disease, to interrupt the chain of infection. This means the virus cannot travel as easily from person to person and the entire community is less likely to become infected.

The term herd immunity comes from the observation of how a herd of buffalo forms a circle, with the strong on the outside protecting the weaker and more vulnerable on the inside. This is similar to how herd immunity works in preventing the spread of infectious diseases. Those who are strong enough to get vaccinated directly protect themselves from infection. They also indirectly shield vulnerable people who cannot be vaccinated, for example, people undergoing cancer treatment, and those whose immune systems are compromised. Often, people who cannot be vaccinated are susceptible to the most serious consequences from being infected (Vally H., 2019).

Herd immunity is a powerful public health tool. By ensuring those who can be vaccinated do get vaccinated we can achieve herd immunity and prevent the illness and suffering that comes from the spread of infectious diseases (Vally H., 2019).

[The following section on herd immunity is from The Conversation (https://theconversation.com/herd-immunity-wont-solve-our-covid-19-problem-139724). It was written by Joanna Wares, Associate Professor of Mathematics, University of Richmond, and Sara Krehbiel, Assistant Professor of Mathematics and Computer Science, Santa Clara University. CC BY-ND. Used with permission.]

Since the start of the coronavirus pandemic, use of the term herd immunity has spread almost as fast as the virus. But its use is fraught with misconceptions. 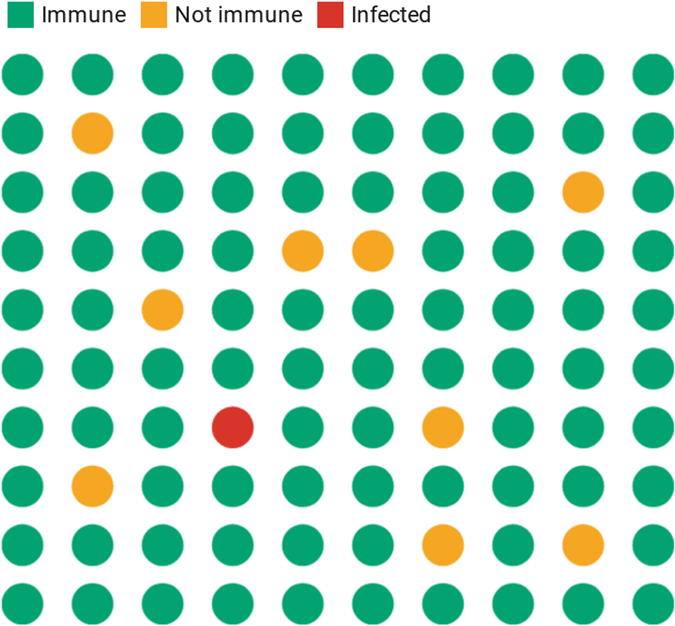 In the United Kingdom, officials briefly considered a herd immunity strategy to protect the most vulnerable members of its population by encouraging others to become exposed and develop immunity to the virus. Others re-ignited the discussion by focusing on how far we are from herd immunity. But trying to reach herd immunity without a vaccine would be a disastrous pandemic response strategy.

As mathematics and computer science professors, we think it is important to understand what herd immunity actually is, when it’s a viable strategy, and why, without a vaccine, it cannot reduce deaths and illnesses from the current pandemic.

If enough people have immunity, the virus is less likely to spread because the few who aren’t immune are less likely to come in contact with someone who is infected.

But herd immunity from SARS-CoV-2 is different in several ways:

Reaching Herd Immunity Without a Vaccine Is Costly

For a given virus, any person is either susceptible to being infected, currently infected, or immune. When a vaccine is available, a susceptible person can become immune without ever becoming infected.

The only route to reach herd immunity without a vaccine is through infection. And unlike chickenpox, a virus such as SARS-CoV-2 will kill many people before herd immunity is reached.

By the end of September 2021, nearly 690,000 people in the United States had died from COVID-19, and the disease can have lingering health consequences for those who survive. Scientists don’t yet know the extent to which people who recover are immune from future infections.

A vaccine is the only way to move directly from susceptibility to immunity, bypassing the pain from becoming infected and possibly dying.

Herd Immunity Reached During a Pandemic Does Not Stop the Spread

An ongoing pandemic doesn’t stop as soon as the herd immunity threshold is reached. In contrast to the scenario of a single person with chickenpox entering a largely immune population, many people are infected at any given time during an ongoing pandemic.

Social distancing and other interventions can reduce the rate of new infectious disease cases. That delays when herd immunity is reached but also reduces deaths.

When the herd immunity threshold is reached during a pandemic, the number of new infections per day will decline, but the substantial infectious population at that point will continue to spread the virus. As Bergstrom and Dean (2020, May 1) noted, “A runaway train doesn’t stop the instant the track begins to slope uphill, and a rapidly spreading virus doesn’t stop right when herd immunity is attained.”

If the virus is unchecked, the final percentage of people infected will far overshoot the herd immunity threshold, affecting as many as 90% of the population in the case of SARS-CoV-2.

Proactive mitigation strategies like social distancing and wearing masks flatten the curve by reducing the rate that active infections generate new cases. This delays the point at which herd immunity is reached and also reduces casualties, which should be the goal of any response strategy.

Herd Immunity Does Not Protect the Vulnerable

People who are particularly vulnerable to COVID-19, such as people over 65, have been urged to stay inside to avoid exposure. However, many of these people live and socialize in communities of people in the same cohort.

Even if the herd immunity threshold is reached by the population at large, a single infected person coming in contact with a vulnerable community can cause an outbreak. The coronavirus has devastated nursing homes, which will remain vulnerable until vaccines are available.

How to Respond to a Pandemic Without a Vaccine

Without a vaccine, we should not think of herd immunity as a light at the end of the tunnel. Getting there would result in millions of deaths in the United States and would not protect the most vulnerable.

For now, washing hands, wearing masks, and social distancing remain the best ways to lessen the destruction of COVID-19 by flattening the curve to buy time to develop treatments and vaccines.

COVID-19’s revised R0 means its threshold for herd immunity is greater than previously thought. If the new R0 value is 5.7, then it is estimated that at least 82 percent of the population must become immune to the virus, either by vaccination or by acquiring antibodies after surviving infection, in order to confer herd immunity from COVID-19 on a population. Unfortunately, it is still not known if surviving the disease provides immunity (Sanche et al., 2020).

What is herd immunity and how many people need to be vaccinated to protect a community?